Home / Life Sciences and Chemistry / Clusters of Aluminum Atoms Found to Have Properties of Other Elements Reveal a New Form of Chemistry
14.01.2005 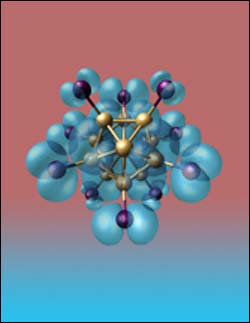 A research team has discovered clusters of aluminum atoms that have chemical properties similar to single atoms of metallic and nonmetallic elements when they react with iodine. The discovery opens the door to using ’superatom chemistry’ based on a new periodic table of cluster elements to create unique compounds with distinctive properties never seen before. The results of the research, headed jointly by Shiv N. Khanna, professor of physics at Virginia Commonwealth University and A. Welford Castleman Jr., the Evan Pugh Professor of Chemistry and Physics and the Eberly Family Distinguished Chair in Science at Penn State University, will be reported in the 14 January 2005 issue of the journal Science.

“Depending on the number of aluminum atoms in the cluster, we have demonstrated ’superatoms’ exhibiting the properties of either halogens or alkaline earth metals,” says Castleman. “This result suggests the intriguing potential of this chemistry in nanoscale synthesis.” The discovery could have practical applications in the fields of medicine, food production and photography.

The researchers examined the chemical properties, electronic structure, and geometry of aluminum clusters both theoretically and experimentally in chemical compounds with iodine atoms. They found that a cluster of 13 aluminum atoms behaves like a single iodine atom, while a cluster of 14 aluminum atoms behaves like an alkaline earth atom. “The discovery of these new iodine compounds, which include aluminum clusters, is critical because it reveals a new form of ’superatom’ chemistry,” said Khanna. “In the future, we may apply this chemistry, building on our previous knowledge, to create new materials for energy applications and even medical devices.”
To make their discovery, the research team replaced iodine atoms with the aluminum clusters in naturally occurring chains or networks of iodine atoms and molecules known as polyiodides. When the researchers substituted the iodine atom with the aluminum cluster, Al13, they observed that the entire chemistry of the compound changed–causing the other iodine molecules to break apart and bind individually to the cluster. The researchers then were able to bind 12 iodine atoms to a single Al13 cluster, forming a completely new class of polyiodides. “Our production of such a species is a stirring development that may lead to new compounds with a completely new class of chemistry and applications,” says Castleman. “Along with the discovery that Al14 clusters appear to behave similarly to alkaline earth atoms when combined with iodine, these new results give further evidence that we are really on our way to the development of a periodic table of the ’cluster elements’.”

The researchers conducted experimental reactivity studies that indicate that certain aluminum-cluster superatoms are highly stable by nature. The team’s related theoretical investigations reveal that the enhanced stability of these superatoms is associated with a balance in their atomic and electronic states. While the clusters resemble atoms of other elements in their interactions, their chemistry is unique, creating stable compounds with bonds that are not identical to those of single atoms.

Using stable clusters provides a possible route to an adaptive chemistry that introduces the aluminum-cluster species into nanoscale materials, tailoring them to create desirable properties. “The flexibility of an Al13 cluster to act as an iodine atom shows that superatoms can have synthetic utility, providing an unexplored ’third dimension’ to the traditional periodic table of elements,” said Khanna. “Applications using Al13 clusters instead of iodine in polymers may lead to the development of improved conducting materials. Assembling Al13I units may provide aluminum materials that will not oxidize, and may help overcome a major problem in fuels that burn aluminum particles.”

This research was supported by the U. S. Air Force Office of Scientific Research and the U. S. Department of Energy.