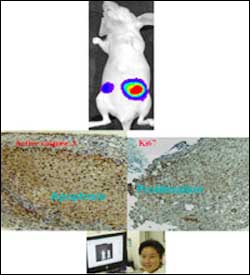 Composite of action of Buip3L and p53 under hypoxia.

Researchers have known for a decade that the p53 tumor suppressor gene is important for killing cells as they proliferate under low-oxygen conditions inside tumors. As tumors grow they outstrip their oxygen supply. If a cell has a normal p53 gene, the p53 protein will eliminate cancerous cells, keeping tumor growth at bay. Under conditions of stress to the cell – such as radiation or chemotherapy and hypoxia – p53 normally eliminates tumors.


Hypoxia, however, induces p53 to mutate: The less oxygen, the more mutations in the p53 gene, so cancer cells are not killed; instead, they proliferate. A team led by Wafik El-Deiry, MD, PhD, Associate Professor, Departments of Medicine, Genetics, and Pharmacology with the Abramson Cancer Center of the University of Pennsylvania, discovered a gene related to p53 called Bnip3L that can also cause cell death. The gene is turned on by p53 and a second transcription factor called hypoxia inducible factor, or HIF. The team silenced Bnip3L in cells with normal p53 and exposed cells to low oxygen conditions. In cell culture and in an animal model with implanted tumor cells, the researchers showed that tumors with silenced Bnip3L grew more aggressively in low oxygen conditions than cells and tumors with intact Bnip3L. El-Deiry and first author Peiwen Fei, MD, PhD, a post-doctoral fellow, report their findings in the December issue of Cancer Cell.

“From this, we predict in humans that another reason for tumor growth is the silencing of Bnip3L,” says El-Deiry. “We think one of the ways that p53 suppresses tumors at their earliest stages is by turning on Bnip3L, and that’s new. There is no information at present about how p53 works in the earliest stages of tumor growth, especially as the growth begins to outstrip the supply of nutrients and oxygen.”

Understanding how cells die after they are starved for oxygen is important for fighting cancer as well as other diseases. “Down the road we would like to find strategies to turn Bnip3L back on to restore the ability to die under hypoxia now that we know how it happens in the first place,” says El-Deiry.