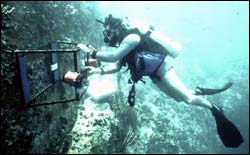 Ecological research, 30 feet down - Jon Witman, professor of biology, photographs an 18-by-24-inch sample of a Caribbean rock wall. He and his team produced and analyzed more than 1,500 such marine images from around the world.

Finding may reveal clues to origins of autism, other human brain disorders

High stress levels during infancy and early childhood can lead to the poor development of communication zones in brain cells – a condition found in mental disorders such as autism, depression and mental retardation.

These are the findings of Dr. Tallie Z. Baram and her collaborators at the UC Irvine College of Medicine, Neurocrine Biosciences, Inc., and the Max Planck Institute of Psychiatry. For the first time, the researchers have identified how increased amounts of a key messenger for stress, the neuropeptide CRH, can inhibit the normal growth of dendrites, which are branch-like protrusions of neurons that send and receive messages from other brain cells.

The researchers believe CRH ultimately may be responsible for these poorly developed zones in brain cells. Results of their study appear in the current online early edition of the Proceedings of the National Academy of Sciences. “These findings may prove to be highly relevant for understanding the origins of several human brain disorders, and they also point to some potential preventive treatments,” said Baram, the Danette Shepard Chair in Neurological Studies. “The activation of stress hormones and molecules seems to initiate a complex cascade of brain effects that is related to depression and dementia. This study reveals a novel role of CRH in this cascade.”

But when the investigators in this study grew the hippocampus of baby rats in a dish and administered higher doses of CRH to the cultured hippocampus, the dendrites matured poorly. In turn, the group found exuberant dendritic growth in hippocampus tissue in which CRH could not exert any effect because the CRH receptor was eliminated via genetic engineering. “Thus, we had two lines of evidence suggesting that too much CRH in the developing hippocampus might lead to the abnormal dendrites,” said Baram, a pediatric neurologist and neuroscientist. “The good news is that we were able to prevent this effect in the lab.”

To do this, the researchers used a selective blocker of the CRH receptors and were able to reverse the actions of CRH, which led to well-developed brain-cell dendrites. But Baram warns that much more research is needed to see if this blocker can work in animal models or in humans.

The Baram group is continuing its study to learn if CRH is involved in adult dendrite atrophy. In previous studies, several research groups have found that chronic stress causes dendrite atrophy in adults, but it is not known if CRH plays a role.

Yuncai Chen, Roland A. Bender, Kristen L. Brunson and Jörn K. Pomper from the Baram group at UCI collaborated with Dimitri E. Grigoriadis of Neurocrine and Wolfgang Wurst of the Max Planck Institute on the study. The National Institutes of Health provided funding support.