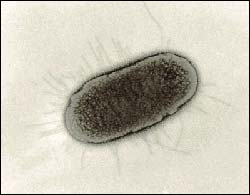 Further investigation into how the common organism Escherichia coli regulates gene expression has given scientists new ideas for designing antibiotics that might drastically reduce a bacterium’s ability to resist drugs.


The findings, reported in the current issue of the journal Cell, suggest that bacteria rely on a key protein in order to properly regulate gene expression — a process fundamental to cell survival. This protein, called DksA, coordinates the expression of numerous genes in response to environmental signals.

Figuring out how to block DksA production in harmful bacteria may help scientists develop antibiotics that these bacteria are less likely to resist, said Irina Artsimovitch, a study co-author and an assistant professor of microbiology at Ohio State University.

In recent work, Artsimovitch and her colleagues discovered that ppGpp regulates gene expression by controlling amino acid production in bacteria. A cell makes ppGpp when amino acid levels are low, and ppGpp tells a cell to go dormant until amino acid levels return to normal.

“But there was something missing from the ppGpp story,” Artsimovitch said. “We knew that ppGpp had a dramatic effect on gene expression, but for some reason that effect was drastically decreased when we conducted experiments in the laboratory.”

Work by other researchers had suggested a link between DksA and the ppGpp-initiated stress response in the cell. But scientists couldn’t agree on what role, if any, DksA played in the effect of ppGpp on gene expression.

Working with a team of researchers led by Dmitry Vassylyev, a scientist with the RIKEN research institution in Japan, Artsimovitch and Ohio State microbiologist Vladimir Svetlov solved high-resolution crystal structures of DksA.

Solving this structure meant that the researchers could at last determine just how DksA helped ppGpp hold fast to its target, RNA polymerase.

DksA uses something scientists call the “backdoor of gene expression,” a cavity on the RNA polymerase molecule called the secondary channel. DksA squeezes through this narrow tunnel toward the site where ppGpp binds to the enzyme. Once here, the protein helps ppGpp stay bound to RNA polymerase.

“The secondary channel seems to be the hotspot for many interactions,” Artsimovitch said. “It leads straight to the active site, and presents a confined area where many proteins and antibiotics that control transcription may bind to carry out their business.”

Knowing what roles ppGpp and DksA play in how bacteria respond to stress and other physiological stimuli may help scientists create new antibacterial drugs that target mechanisms specific and unique to harmful bacteria.

“Conventional antibiotics aimed at killing bacteria also put immense pressure on bacteria to survive, and to ultimately develop resistance to these drugs,” Artsimovitch said. “Forcing harmful bacteria into a stationary state by controlling ppGpp levels may be the way to circumvent the rise in antibiotic resistance.

“ppGpp and DksA are found in all bacteria, including harmful ones,” she continued. “Using ppGpp-based compounds to shut down gene expression in harmful bacteria could help curb the spread of infections.”

Grants from the National Institutes of Health and from RIKEN supported this research.