How wounds heal – Clues from flies 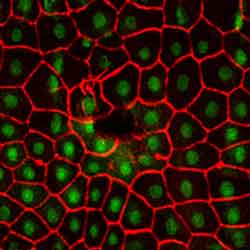 Anyone who’s endured their share of childhood scrapes has probably heard some version of the motherly admonishment, “Don’t pick that scab, you’ll just make it worse!” It turns out, Mom was on to something, according to research published on-line in the open-access journal PLoS Biology.

Tissue damage in humans triggers a well-characterized response marked by rapid blood clotting and a recruitment of epidermal cells to the injury. When you remove a scab, you’re also removing some of the newly regenerated tissues growing underneath, thereby interfering with the healing process. Many different cell types and proteins have been linked to the repair process, but the complexity of the mammalian wound response has challenged efforts to determine their individual roles.

Michael Galko and Mark Krasnow of Stanford University turned to the quintessential genetics organism, Drosophila melanogaster, to create a novel system for studying wound healing. After stabbing fruitfly larvae with a needle to create a nonfatal puncture wound, the researchers observed the familiar blood clotting and spreading of epidermal cells to promote healing.

Since this epidermal spreading resembles that seen during a well-studied developmental stage of the fruitfly, the authors looked at the roles of specific genes to shed light on the cellular events of healing. Indeed, they found that one particular cell signaling pathway was activated during the peak hours of wound healing. Inhibiting the pathway in fly mutants had dramatic effects on the wound-healing process. The early stages of healing–including plug and scab formation–weren’t affected, but epidermal spreading to regenerate the intact epidermis was either blocked or defective. In contrast, larvae with defects in a gene required for the generation of crystal cells–a type of blood cell implicated in processes linked to scab formation–could not properly form scabs. In these scabless wounds, cells at the wound’s margin started to close the wound but often failed, and the wound did not heal. Score one for Mom.

These results suggest that each stage of wound healing is controlled by distinct genetic programs and signaling pathways triggered by the wound. Since many aspects of the fly wound response resemble those in mammals, it’s likely that the molecular components are also shared. That makes identifying the molecular underpinnings of wound healing a high research priority. And thanks to the powerful system presented here, this task should be all the easier.