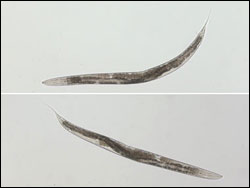 Biologists at the University of California, San Diego have discovered a new mechanism that allows cells to fight a class of toxins made by a wide variety of disease-causing bacteria.

Their discovery, detailed in this week’s early online edition of the Proceedings of the National Academy of Sciences, could eventually pave the way for the development of new, more effective treatments for bacterial diseases that kill or sicken millions of people each year, such as pneumonia, strep throat, scarlet fever, rheumatic fever and toxic shock syndrome.

The essential achievement in the UCSD discovery is the team’s finding that animal cells, from roundworms to mammals, have a natural defense mechanism to ward off certain kinds of bacteria that secrete toxins in order to form tiny holes in the membranes of the cells they infect. Scientists estimate that such “pore-forming” bacterial toxins account for approximately one-quarter of the known protein “virulence factors” that increase the infection and severity of a bacterial-caused disease.

“For the first time, we have provided a glimpse of how the innate animal immune system reacts to protect itself against a major bacterial virulence system,” says Raffi V. Aroian, an associate professor of biology at UCSD who headed the team. “By learning how we can enhance and protect that defense mechanism in human cells, we can help protect people from many kinds of serious bacterial infections.”

Pore-forming bacterial toxins are used by bacteria such as Staphylococcus aureus, the most common cause of hospital-acquired infections, which affects some 500,000 patients each year in U.S. hospitals, and Streptococcus pneumoniae, the bacterium responsible for seven million cases of otitis media in children and 500,000 cases of pneumonia in children and adults in the United States each year. The toxins also play a major role in infections from Helicobacter pylori, a bacterium that causes ulcers; Legionella pneumophila, which is responsible for Legionnaire’s disease; and Streptococcus pyogenes, which can lead to strep throat, scarlet fever, the skin infection impetigo, pneumonia, acute kidney inflammation, toxic shock syndrome, acute rheumatic fever, rheumatic heart disease and the flesh-eating disease known as necrotizing fasciitis.

Researchers in Aroian’s laboratory discovered several years ago that the roundworm C. elegans and other nematodes can be killed or made seriously ill by a pore-forming toxin known as Cry5B. That toxin is produced by Bacillus thuringiensis, the bacterium commonly known as Bt, which is used by organic farmers as a natural pesticide to control insect pests on crops. Although Cry5B can’t hurt humans because the toxin doesn’t recognize human cells, it hurts worms in a manner similar to the pore-forming toxins that affect humans.

Aroian and his student discovered that when C. elegans is exposed to either a low dose of Cry5B toxin for a long period of time or a high dose of the toxin for a short period of time, as might occur in nature, the roundworms recover and continue to survive. Recognizing that this natural defense mechanism to a pore-forming toxin could have application to human bacterial infections, Aroian and Danielle Huffman, a graduate student in his laboratory and the first author of the research paper, set about to determine the biochemical and genetic mechanisms that allowed the worms to do this.

Huffman and Roman Sasik, a postdoctoral fellow working with Jacques Corbeil at UCSD’s medical school, developed a way to determine which roundworm genes were activated when they came into contact with the pore-forming Cry5B toxin and an equivalent dose of cadmium, a toxic heavy metal. Some of the genes activated by one toxin were activated by the other, but the scientists found that some were not, including two that were known to play important and general roles in immunity in humans. However, these genes had never been shown to be important for protecting against this class of bacterial toxin.

Aroian and Huffman further discovered that these two genes, SEK1 and KGB1, controlled two “pathways” of biochemical reactions that are essential in allowing roundworms to survive a 30 minute exposure to a high dose of Cry5B toxin. Roundworms missing either of the two genes were hypersensitive to Cry5B and quickly died after such an exposure to a high dose of toxin or to a low, chronic dose of toxin, the scientists found.

Working with Laurence Abrami and F. Gisou van der Goot of the University of Geneva, the scientists found the same basic responses in hamster kidney cells with and without one of the two genes. These cells were exposed to aerolysin, the pore-forming toxin from Aeromonas hydrophila, an antibiotic-resistant bacterium that causes lesions and illness in humans. The results from this second experiment suggest that the gene and the biochemical pathways it controls are a generalized, natural defense mechanism to pore-forming toxins in mammalian cells as well as in roundworms.

Now that scientists have a basic understanding of the biochemical mechanisms that enable cells to defend themselves against pore-forming toxins, biomedical researchers can begin to develop drugs against the rising tide of antibiotic-resistant strains of Staphylococcus aureus, Streptococcus pneumoniae, and other bacteria that use pore-forming toxins in their arsenals.

“Now that we know how cells defend themselves, we can think about developing therapeutic agents to improve a person’s defenses against pathogenic bacteria that use this class of toxins,” says Aroian. “You can’t fight something you don’t understand, but now we are starting to get a very basic understanding of how a major class of virulence factors works. In addition we have now the tools to try to understand this in greater detail.”

Funding for the project was provided by grants from the National Science Foundation, Burroughs-Wellcome Foundation and Beckman Foundation.