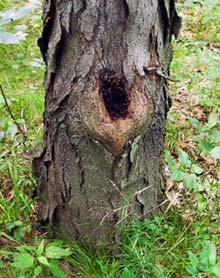 It’s war inside a tree hole, says WUSTL ecologist Jamie Kneitel. He has studied the effects of three different parameters on the bug-eat-bug world found in the seemingly innocuous, surprisingly revealing, ecosystem.

’It’s a war inside a tree hole’

If you think your place is a dump, try living in a tree hole: a dark flooded crevice with years of accumulated decomposing leaves and bugs, infested with bacteria, other microbes, and crawling with insect larvae.

A biologist at Washington University in St. Louis has studied the ecosystem of the tree hole and the impact that three factors – predation, resources and disturbance — have on species diversity.

Kneitel uses Shakespeare’s Richard the III reference — “subtle, sly and bloody,” Richard III’s mother’s description of her son as a little boy — when talking about the ecosystem he studies. A tree hole can be found in nearly every forest and is an ecosystem surprisingly overlooked by ecologists.

Created by a lost tree branch or deformed trunk, the tree hole collects water, which supports an aquatic community that lets an ecologist like Kneitel address fundamental ecological questions. In this small ecosystem, bugs and leaves fall into this pool of water and decompose, which provides the energy for hundreds of species, including bacteria, protozoa, and mosquito larvae. It’s a generally thriving community where these critters battle each other in a mini-survival-of-the-fittest.

To perform his study, Kneitel recreated the tree hole ecosystem in the laboratory, which allowed him to change the parameters to create different ecological situations. The most common disturbance for a tree hole is lack of water. Resources equate to the food supply, and predation among the three basic organisms – protozoans, rotifers and mosquito larvae – is rampant, and varies depending on resources and disturbance.

The results will be published in a forthcoming isue of Ecology. The research was supported by the National Science Foundation.

Kneitel studied between 20 and 25 protozoan species and four rotifers; protozoans are single-celled organisms, rotifers, multi-celled, yet some protozoans are bigger than rotifers and will prey upon them. Mosquito larvae browse and filter-feed and will attack either of the groups of species.

Kneitel said most studies of this sort look at two factors, compared with the three he and Chase studied.

“Our results show that if you change any one of the three factors, you alter the face of the community,” Kneitel said. “We found that we had a group of species that were good competitors, another that is good at tolerating predators, and yet another that can survive and tolerate disturbances.

“These trait (niche) differences allow many species to coexist with one another at different spatial scales. This is true for this community, but also many other communities work in this way.”

Kneitel said the scale of the tree hole system allows him to ask “big picture” questions of ecosystems that can’t be asked on a large scale.

“You can’t really ask these types of questions using long-lived organisms like wolf and deer populations,” he said. “It takes years and years to see the effects of predation and disturbance on population dynamics. With these communities, you can do an experiment in a month.”