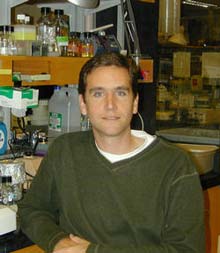 Using a common worm as a model, researchers from Duke University Medical Center have identified specific genes within Salmonella that give the bacteria its ability to infect host cells.

They said their findings could ultimately lead to improved drugs to prevent or treat Salmonella infections.

The researchers found four genes related to the Salmonella’s “molecular syringe” that are required for the bacteria to have maximum potency in infecting the worm, known as Caenorhabditis elegans. The virulence factors — injected into the host cells by Salmonella — act by blunting the innate immune system of C. elegans from attacking and destroying the infecting bacteria.

These findings are important, the researchers said, because the C. elegans innate immune response to Salmonella infection is quite similar to that of mammals, including humans. For this reason, the researchers said that their C elegans model can provide new genetic insights into the relationships between invading microbes and their target host cells.

The results of the Duke experiments were published June 8, 2004, in the journal Current Biology. The research was supported by the National Institutes of Health and the Whitehead Institute for Biomedical Research.

“C elegans lives in the soil, so it continually comes into contact with bacteria and other microbes,” said lead researcher microbiologist Alejandro Aballay, Ph.D. “It has a highly developed system for not only recognizing bacteria, but also responding to them. The ability of its innate immune system to respond appropriately to specific bacteria is very similar to that of mammals.

“The goal of our research is not only to better understand what makes a particular pathogen harmful for the host, but to determine those characteristics of the host that either make it resistant or susceptible to the pathogen,” Aballay added. “To be successful in this type of research, one cannot just focus on the pathogen; the relationship between the pathogen and host is so important.”

C elegans is an ideal model for genetic studies, Aballay said, because the worm takes only three days to develop from an embryo to an adult capable of reproducing. Also, scientists can easily manipulate specific genes in the worm, and as opposed to other animal models, large quantities of the animals can be grown quickly. They can even be frozen and used at a later date, Aballay said.

For their experiments, the team used the C. elegans-Salmonella enterica model developed by Aballay. Specifically, the researchers examined one of the bacteria’s five known “pathogenecity islands,” or clusters of genes that have accumulated in S. enterica bacteria through time. These genes have been acquired by the bacteria through the course of evolution as a way of adapting and improving its chances of successfully infecting its hosts, Aballay explained.

“In this study we have related several genes located in pathogenicity islands to S. enterica pathogenesis in worms,” Aballay said.

Within the pathogencity island 1 is the “molecular syringe,” known as the Type III secretion system (TTSS). This TTSS punctures the cell wall of the host and injects the virulence factors inside. One of the specific virulence factors injected into the host cells through the TTSS, termed SptP, was critical for the Salmonella’s ability to kill C. elegans.

“While there are at least 13 effector proteins, or virulence factors, which are injected into the host through the TTSS, our studies have shown that a single protein (SptP) can have a major impact on an entire animal,” Aballay explained. “What this factor does is diminish the animal’s ability to mount an effective immune response.”

Aballay believes that this model opens news areas of research for better understanding the relationship between pathogens and host responses.

“While many virulence factors have been identified, the mechanisms by which they contribute to bacterial pathogenesis remain unknown,” he said. “But with the identification of the targeted pathways in the host, we should be able to figure out how virulence factors influence the innate immune response.”

Aballay said that the C elegans system could be an effective living model for testing or screening new compounds or drugs for treating Salmonella in humans. However, he added, much additional research in other living models is necessary before these new insights can be applied to human disease.

Using the C elegans model, Aballay and his colleagues are now conducting genetic screens to find genetic variants called polymorphisms in the host that appear to confer either resistance or susceptibility to Salmonella. The researchers expect that these polymorphisms would also play a role in human disease.

Other members of the research team were Duke’s Jennifer Tenor, as well as Beth McCormick, Ph.D., and Frederick Ausubel, Ph.D., of Harvard Medical School, Boston.