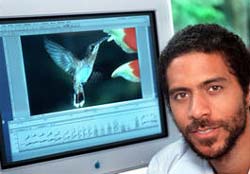 Neurobiologists have discovered that a nearly identical version of a gene whose mutation produces an inherited language deficit in humans is a key component of the song-learning machinery in birds.

The researchers, who published their findings in the March 31, 2004, issue of the Journal of Neuroscience, said that their finding will aid research on how genes contribute to the architecture and function of brain circuitry for singing in birds.

Among the lead researchers was neurobiologist Erich Jarvis, Ph.D., of Duke University Medical Center and Constance Scharff of the Max Planck Institute for Molecular Genetics in Germany. Co-first authors of the paper were Sebastian Haesler of the Max Planck Institute and Kazuhiro Wada, M.D., of Duke. Other authors were Edward Morrissey of the University of Pennsylvania and Thierry Lints of the City College of New York. The work was supported by the U.S. National Science Foundation and the German Research Foundation.

According to Jarvis, the search for the gene, called FoxP2, began when other researchers reported that the human version of the gene was responsible for a deficit in language production in humans.

“In affected humans, the mutation causes a very specific dysfunction,” said Jarvis. “These people have largely normal motor coordination, but an inability to correctly pronounce words or form them into grammatically correct sentences. What’s more, they have trouble understanding complex language.”

When evolutionary geneticists compared the DNA sequence of the normal human FoxP2 gene with nonhuman primates and other species, they found that humans have a specific sequence variation not found in any other mammal, said Jarvis.

“Thus, since birdsong is a learned vocal behavior like speech, we decided to find out if a version with this same variation was present in vocal-learning birds,” said Jarvis.

Particularly significant, he said, is that the human version of FoxP2 is a type of gene that regulates many other genes — thus making it an ideal candidate for a gene in which a single change during evolution could create a cascade of changes that would influence an advance such as speech or birdsong.

In their studies, Jarvis and Wada at Duke, and Scharff and Haesler in Germany, compared brain expression of the FoxP2 gene in birds that are vocal learners with those that are nonlearners. Vocal learners included species of finches, song sparrows, canaries, black-capped chickadees, parakeets and hummingbirds. A vocal nonlearner included ring doves; and the researchers also studied the gene in crocodiles, the closest living relative to birds.

The teams also analyzed the structure of the songbird FoxP2 gene and compared it with the human gene.

Researchers in another laboratory headed by Stephanie White at UCLA published a paper in the same issue of the Journal of Neuroscience comparing the expression of FoxP2 and its close relative FoxP1 in songbirds and humans.

Scharff, Jarvis and their colleagues confirmed that all the non-mammals they studied, including crocodiles, did have a FoxP2 gene. And although the genes in humans and song-learning birds were almost identical (98 percent), the song-learning birds did not have the specific variation characteristic of humans.

“Thus, this human-specific mutation is not necessarily required for vocal learning, at least not in birds,” said Jarvis. “Or perhaps there’s another variation in the songbird gene that also leads to vocal learning.”

The researchers did find that the FoxP2 gene was expressed in the same area of the brain — called the basal ganglia — in both humans and song-learning birds. And most importantly, the researchers found the FoxP2 gene to be expressed at higher levels in the “vocal learning nucleus of the basal ganglia of song-learners” at times during the bird’s life when it is learning song. This critical learning time might either be during early development in the case of zebra finches, or during seasonal changes in song learning, as in canaries.

“We found that the levels of FoxP2 seem to be increasing at times just before the bird begins to change its songs,” said Jarvis. “So, this is consistent with a cause-and-effect role, in which the gene switches on, allowing the song-learning circuitry to become more plastic, which allows the birds to imitate sounds.”

“By contrast, when we analyzed the non-vocal-learning species, we did not see this localization or difference in level of FoxP2,” said Jarvis.

Jarvis and Scharff are now completing a related study about the precise variation in FoxP2 between vocal learning and nonlearning birds, to pinpoint whether there are sequence changes between birds that learn to sing and those that don’t — analogous to the differences between humans and chimps. They will also further explore the molecular signaling pathway involving FoxP2, and attempt to alter the gene in birds to explore how mutations affect vocal learning.

Jarvis emphasized that the discovery of FoxP2 represents only the beginning of a major effort to explore the genetic machinery underlying vocal learning and cautions that it has not been proven that FoxP2 is required for vocal learning.

“We definitely don’t think that FoxP2 is the single causal gene for vocal learning,” he said. “The difference between vocal learners and nonlearners — whether between humans and nonhuman primates; or between learning and nonlearning birds — is most likely to arise in connections of forebrain areas to motor neurons that control the voice. It is intriguing though that an ancient gene like FoxP2 appears to have something to do with learned vocalizations both in humans and in birds.