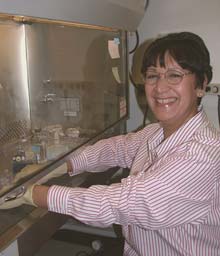 Dr. Patricia Pietrantonio in her laboratory where cell lines are maintained in serum and under sterile conditions in the tissue culture laboratory. Cell lines need to be split under the hood. (Texas Agricultural Experiment Station photo by Edith Chenault)

Texas A&M University researchers are studying the genes of the mosquito species, Aedes aegypti, the carrier for both dengue and yellow fever, hoping to keep deadly mosquito-borne diseases at bay.

Dr. Patricia Pietrantonio, associate professor of entomology with the Texas Agricultural Experiment Station, is leading a team of researchers studying the hormone-controlled mechanism by which mosquitoes excrete waste.

“This research has far-reaching implications for the discovery of new alternatives for insect control,” Pietrantonio said.

Presently, a human vaccine for yellow fever exists, but none for dengue.

The researchers are hoping the studies will reveal how the female mosquito’s system produces a diuretic response during and after a blood meal. Aedes aegypti feed during the daytime and need a blood meal to reproduce. The blood meal triggers vitellogenesis (formation of the yolk of an egg) and oogenesis (egg formation).

“They feed on humans and animals, and if the blood meal is successful, then reproduction begins,” Pietrantonio said. “They can lay eggs for one to two days, and then they can feed again. The reproductive potential of the female is quite significant.”

“Diuresis, or the production of urine, is very fast. If they are still engorged, they fly very poorly and susceptible to being slapped by a human or eaten by a predator,” she explained.

“We want to know how the mosquito gets rid of all this water so fast. It is very complex process.”

To do so, researchers are cloning mosquito genes and studying cell receptors, the proteins in the cell membranes involved in the transfer of information from one area of the cell to another. The process is regulated by hormones.

Hormones are released from the brain and nervous system, bind to the receptors and “tell these tissues” to activate a variety of proteins that ultimately cause fluid secretion.

“If we disrupt the hormonal communication, the tissues will not know what to do,” she explained. In this case, an insecticide targeting the hormone receptor can be developed to disrupt the secretion of fluid.

“You can be very precise and very selective (with an insecticide like this),” she said. “One wants to be very selective in what will be killed or harmed. Not just any chemical will do, especially if you are going to put something very close to humans. It is a long-term research that has potential applications for vector-transmitted diseases for which there is no vaccine.”

The first reported epidemics of dengue fever occurred in the late-1700s in Asia, Africa and North America. South Texas experienced its largest outbreak of dengue fever in nearly 20 years in October 1999, with more then 100 cases reported in Texas and Mexico.

Dengue viruses are transmitted by the mosquito during the feeding process. Dengue is very painful – patients feel as though their bones are breaking – but is rarely fatal. However, dengue hemorrhagic fever and dengue shock syndrome are often fatal.

Yellow fever symptoms are fever, chills, prostration, jaundice and in severe cases, internal hemorrhaging, coma and death. It is endemic to the tropic and subtropics, and the disease occurs in sporadic outbreaks. Immunization is an effective preventive measure, Pietrantonio said.

But, “the control of dengue is achieved by killing the vector, the mosquito,” she said. “We need to know more about the weak points of the mosquito to find new ways of control.”