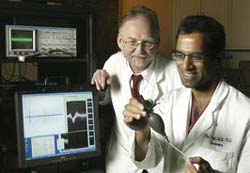 In their first human studies of the feasibility of using brain signals to operate external devices, researchers at Duke University Medical Center report that arrays of electrodes can provide useable signals for controlling such devices. The research team is now working to develop prototype devices that may enable paralyzed people to operate “neuroprosthetic” and other external devices using only their brain signals.

While the new studies provide an initial proof of principle that human application of brain-machine interfaces is possible, the researchers emphasize that many years of development and clinical testing will be required before such neuroprosthetic devices are available.

The research team, led by neurosurgeon and professor of neurobiology Dennis Turner, M.D., and neurobiologist Miguel Nicolelis, M.D., will publish their results in the July 2004 issue of the journal Neurosurgery. Principal members of the research team also include Parag Patil, M.D., a resident in neurosurgery and lead author of the study, and Jose Carmena, Ph.D., a post-doctoral fellow in neurobiology. The research was supported by the Defense Advanced Research Projects Agency and the National Institutes of Health.

The research builds on earlier studies in the Nicolelis laboratory, in which monkeys learned to control a robot arm using only their brain signals.

In the initial human studies, Patil and colleagues recorded electrical signals from arrays of 32 microelectrodes, during surgeries performed to relieve the symptoms of Parkinson’s disease and tremor disorders. These surgical procedures routinely involve implanting electrodes into the brain and then stimulating the brain with small electrical currents to relieve the patient’s symptoms. The patients are awake during surgery, and the neurosurgeons typically record brain signals to ensure that permanent electrodes are placed into the optimal location in the brain.

In the experiments being reported in Neurosurgery, the researchers added a simple manual task to the surgical procedure. While brain signals were recorded using the novel 32-channel electrode array, the 11 volunteer patients were asked to play a hand-controlled video game.

Subsequently analyzing the signals from these experiments, the team found that the signals contained enough information to be useful in predicting the hand motions. Such prediction is the necessary requisite for reliably using neural signals to control external devices.

“Despite the limitations on the experiments, we were surprised to find that our analytical model can predict the patients’ motions quite well,” said Nicolelis. “We only had five minutes of data on each patient, during which it took a minute or two to train them to the task. This suggests that as clinical testing progresses, and we use electrode arrays that are implanted for a long period of time, we could achieve a workable control system for external devices,” he said.

While other researchers have demonstrated that individually implanted electrodes can be used to control a cursor on a computer screen, complex external devices would require data from large arrays of electrodes, said the Duke researchers.

According to Nicolelis, another major difference between the initial human studies and the monkey studies is that recording in the human patients were made from electrodes inserted deeper into the brain, in subcortical structures, rather than the cortical surface.

“This shows that one can extract information not only from cortical areas, but from subcortical ones, too,” said Nicolelis. “This suggests that in the future, there will be more options for sampling neuronal information to control a prosthetic device,” he said.

According to Turner, the progression to human clinical studies presents a number of challenges. For example, he said, the data with monkeys were obtained from electrodes attached to the surface of the cerebral cortex.

“We initially used subcortical electrodes, because they are more stable because they are buried deeper,” said Turner. Also, he said, the deeper regions present other advantages. “The way the brain works, all the signals for motor control are filtered through these deep regions of the brain before they reach the final cortical output,” he said. “So, they are theoretically easier to record from than cortical areas. The subcortical areas are also denser, which means there are more cells to record from in a smaller area.

Working with Duke biomedical engineers, the research team is currently developing the initial prototype of a neuroprosthetic device that will include a wireless interface between the patient and the device.

According to Turner, while the most obvious application of such technology would be a robot arm for a quadriplegic, he and his colleagues are planning other devices as well. One would be a neurally controlled electric wheelchair, and another a neurally operated keyboard, whose output could include either text or speech. Such devices could help both paralyzed people and those who have lost speech capabilities because of stroke or amyotrophic lateral sclerosis (Lou Gehrig’s disease).

A key question in future clinical studies will be whether humans can incorporate such devices into their “schema,” or neural representation of the external world, said Turner. The monkeys in Nicolelis’ studies appeared to do just that.

“We do know that for all kinds of motor training, such as riding a bicycle, people incorporate an external device into their schema, and the process becomes subconscious,” he said. “We will build on that phenomenon in our human studies. It’s known, for example, that patients who don’t have use of their arm still show in MRI studies that the control centers in the brain are working normally. When they are asked to imagine moving their arm, the control centers become active. So, we have good hope that the neurons in those centers can still provide the same signals, even though the arm isn’t physically working.”

As their next major step, said Turner, the researchers have already applied for federal approval to begin implanting experimental electrode arrays long-term in quadriplegic patients. Such tests, conducted over the next three to five years would involve implanting the arrays in specific regions, asking the patients to perform specific tasks and then exploring which tasks are optimally controlled by that region.