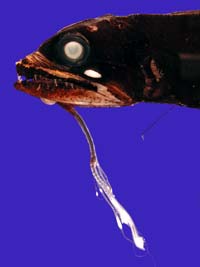 Dr. Tracey Sutton, a fish ecologist at the HARBOR BRANCH Oceanographic Institution in Ft. Pierce, Fla., has discovered a new species in a bizarre and elusive family of deep-sea predatory fish known collectively as dragonfish. The find, reported in the current issue of the journal Copeia, is the first new dragonfish species discovered in more than a decade.

The first specimen of the new species, dubbed Eustomias jimcraddocki, was large, compared to the average pencil-sized dragonfish at about six inches long and roughly the size of a hot dog. Sutton named it after Jim Craddock, a legend in the deep-sea fish biology field.

Sutton discovered the fish during an expedition to Bear Seamount, off New England, that was sponsored by the National Oceanic and Atmospheric Administration’s Office of Ocean Exploration. Now the head of HARBOR BRANCH’s Fish and Plankton Ecology Department, he was at the time a Postdoctoral Scholar at the Woods Hole Oceanographic Institution in Massachusetts.

“The fact that we are still finding new species in one of the best-studied oceanic regions in the world tells us there is still a lot more out there to be known,” says Sutton, who is also a leader in the ambitious international effort to identify all ocean animal and plant species known as the Census of Marine Life.

Sutton plucked the new dragonfish from a net being used to sample the study area’s marine life. While identifying the catch on board, he realized that the specimen represented a new species. Later he traveled to the Smithsonian Institution and Harvard to do some fish sleuthing. In museum collections at those institutions, he found 13 additional specimens collected in the Atlantic over the past 30 years that had previously been either unidentified or misidentified. This work verified that the new species was in fact unique.

Dragonfish are so rare that scientists have often been forced to study and describe new species based on a single specimen. “I really wanted more than just one fish,” says Sutton, “so I was relieved to find more.”

As with all dragonfish, which live at depths ranging from about 600 to 3,000 feet, the new species has menacing teeth, and a mouth that can jut out to engulf prey as wide as it is. They also have small organs along their bellies that produce light, or bioluminescence, and that may serve as camouflage to make the fish blend in with faint sunlight from above, thus appearing invisible to potential predators below.

The distinguishing feature of dragonfishes is a long thin protrusion known as a barbel anchored at the fish’s chin that trails below its body. The barbels look like tree branches, and each species has a unique barbel pattern. At the end of the barbel is a bioluminescent organ the animals use like a fishing lure to attract prey, mainly lanternfish. If the barbels served only this function, scientists would expect all dragonfishes to have similar barbels. However, because the protrusions are so varied, some theorize the fish may also use them to identify other members of their own species for reproduction.