For some gorillas, local kin may mean local peace 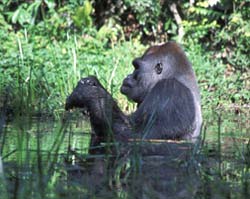 Scientists studying the elusive western gorilla observed that neighboring social groups have surprisingly peaceful interactions, in contrast to the aggressive male behavior well documented in mountain gorillas. By analyzing the DNA from fecal and hair samples of the western gorilla, scientists uncovered evidence that these neighboring social groups are often led by genetically related males. These findings suggest connections between genetic relationships and group interactions, parallels with human social and behavioral structures, and clues to the social world of early humans.

In the new work, reported by Brenda Bradley and colleagues at the Max Planck Institute for Evolutionary Anthropology and Stony Brook University, the researchers collected DNA samples to characterize patterns of paternity within and among western gorilla social groups. The authors found that a strong majority of silverbacks were related to other silverbacks in the area and that in almost all cases, the nest sites of related silverbacks were found near each other. It was already known that both male and female western gorillas leave their natal group once mature, but the new findings suggest that the dispersing males may remain in the vicinity of male kin, forming a so-called “dispersed male network.”

These genetic results point to a social structure previously unrecognized in gorillas and may help explain other unique characteristics of the western gorilla. Recent studies have reported that western gorillas exhibit frequent and often peaceful encounters between groups, behavior that differs significantly with that of the more extensively studied mountain gorilla. In contrast, the mountain gorillas have infrequent social interactions with other groups and, when they do occur, they tend to involve aggressive male-male threat displays and female herding behavior. Moreover, multiple adult male mountain gorillas, often relatives, may remain together within a given mountain gorilla group, rather than dispersing.

The researchers theorize that the dispersed male network and the social behavior of the western gorilla may be connected, in part because peaceful interactions between related males may be beneficial. This idea is in keeping with kin-selection theory, a well-regarded set of ideas for how related members of a society interact to benefit the related group. According to the authors, western gorilla male networks may benefit younger males as they attempt to attract females and form new groups, since male-male aggression is thought to hinder the acquisition and retention of females. Similar scenarios have been reported for some bird species, and there is ample evidence of such relationships underlying aspects of human social interactions, including marriage patterns. In addition, some relevant aspects of western gorilla society are shared with chimpanzees. The new findings point to characteristics that appear to be held in common between humans and some other African apes, suggesting that kinship patterns both within and among groups may have played an important role in shaping the social world of early humans.