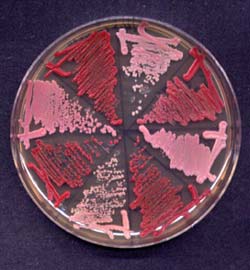 The culprit behind mad cow disease, a.k.a. bovine spongiform encephalopathy, is the most infamous mammalian form of prions. Prions are misfolded proteins that are capable of growing, replicating, and being passed on to daughter cells – that is, they are by themselves heritable. Beyond their disease manifestation, prions also occur naturally in some organisms (such as yeast) and may play important roles in their growth and development. Now, Osherovich and colleagues have identified the amino acid sequences that allow prions to aggregate and replicate – and thereby pass through generations of cells – and prove this by designing an artificial yeast prion that does not exist in nature.

Prion-forming proteins normally exist as normal cellular components. But they possess the innate ability to alter their three-dimensional structure, which changes their function and makes them almost impossible to destroy. Prions grow by inducing normal proteins to alter their shape and adhere to an initial aggregate “seed.” These growing masses are then thought to divide with the help of “chaperones,” cellular proteins that aid in protein folding and transport, resulting in smaller prion particles called propagons. The propagons are then distributed to both mother and daughter cells during division, thereby infecting the next generation of cells.

Lev Osherovich and colleagues confirmed what others have seen, namely that an area rich in glutamine and asparagine was responsible for the aggregation and growth of prions-acting like a patch of Velcro that locks the misshapen proteins together. They went on to find that a short stretch of peptide repeats was required for the inheritance of prions – the proper division of prion masses and subsequent distribution of propagons during cell division. The authors suggest that oligopeptide repeats function as a secure binding location for chaperone proteins, which are necessary for heritability, and thus infectiousness, of prions. These results help explain why stable inheritance of prions is rare; while many proteins have stretches of amino acids similar to the aggregation sequence, few also contain sequences that permit inheritance. Osherovich and colleagues were able to create an artificial prion by fusing the oligopeptide repeats to an expanded polyglutamine tract.

By creating artificial hybrid prions, Osherovich and colleagues showed that the two discrete elements of prion-forming domains are portable and work together regardless of their origins. The authors suggest that other artificial prions could be used as a model system to study different types of aggregation sequences, such as those found in the human prion protein responsible for Creutzfeldt-Jakob’s disease or the misshapen plaques of proteins that contribute to Alzheimer’s disease.

This article is presented as a pre-issue publication. It will be part of our April 2004 issue