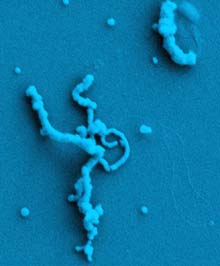 Polymer fibers extruded by microbes found in an abandoned Wisconsin iron mine serve as templates for the manufacture of microscopic crystals of hairlike proportions. The unusual crystals and how they are made may provide key insight into how nature makes some of its most durable materials, substances such as teeth, bone and shell. The work was reported in the March 12 issue of Science by a group led by Jill Banfield of UC-Berkeley and Gelsomina De Stasio, professor of physics at UW-Madison. <br>Photo by: courtesy Gelsomina De Stasio

In recent years, scientists have unearthed a trove of subterranean microbial oddities, bugs that live and thrive in bizarre and extreme environments, and that accomplish remarkable feats to survive there.

Now, the flooded depths of an abandoned iron mine in southwestern Wisconsin have yielded yet another novelty: microbes that produce nanometer-scale crystals of extraordinary length. The discovery of the willowy microscopic crystals may open a broad new window to human understanding of biomineralization, the same process that produces bone, teeth and shell, some of nature’s toughest and most intriguing biological materials.

Writing in the March 12, 2004 issue of the journal Science, a team of scientists from the University of California, Berkeley and the University of Wisconsin-Madison describe not only the discovery of the willowy microbe-made crystalline structures, but also the process by which they are produced.

“The crystals are unusual primarily in their large aspect ratio. They are only a couple of nanometers wide and up to about ten microns long. Because they are over a thousand times longer than they are wide, they can be visualized as having the same proportions as human hair,” says Jill Banfield, a UC Berkeley professor of earth and planetary science and the senior author of the Science paper.

Taking the discovery an important step further, the Wisconsin-California team used X-rays generated by the storage ring at the UW-Madison Synchrotron Radiation Center, and a novel microscope, to chart the chemical processes that govern the formation of the crystals, revealing a production template that could be at the heart of the biomineralization process.

“The key is finding a template,” says Gelsomina De Stasio, a UW-Madison professor of physics who, with Clara S. Chan of UC Berkeley, was a lead author of the Science paper. “How were these crystals formed?”

In nature, the crystals are formed in strands of a polymer that grow from the cell membranes of the microbes, which are more than likely metabolizing iron from the mine environment.

“We are dealing with microbes that probably oxidize ferrous iron and reduce oxygen,” says Banfield. “The product, ferric iron, then precipitates. The precipitation occurs on microbial polymers attached to the cell.”

The results, says De Stasio, are crystal structures of bizarre form: “The microbes produce a bunch of noodles, filaments on the cell surface, and at the core of the filament is a crystal. These polymer filaments extruded by the cells template the formation of these incredible crystals.”

The new discoveries were made with the help of recreational scuba divers who routinely retrieve biofilms growing in the flooded tunnels of the Piquette Mine in Tennyson, Wis., for scientific analysis. These newfound crystal-making organisms occur in pumpkin-colored biomineral accumulations and in the water column of the flooded mine, according to Banfield.

She notes that microorganisms are known to make crystals for a variety of purposes. For example, some bacteria make magnetite to aid navigation, and others use their powers of biosynthesis to sequester toxic metals such as uranium.

But the structure of the crystals made by the microbes in the Piquette Mine was unexpected, “given the conditions under which they formed,” Banfield says. “We attribute this to the effect of the polymer. They are different from virtually all other crystals in their aspect ratio.”

Using a novel X-ray microscope to analyze samples retrieved from the mine, De Stasio and her group were able to observe the chemical interplay between the microbial polymer and the crystal.

Their detailed portrait of how the polymer strand is chemically bound to the crystal suggests that a templating process governs the synthesis of the slender crystals. The use of templates is widespread in nature. However, how animals and microorganisms use the process at the molecular level is poorly understood because of the difficulty of simultaneously probing the soft, light polymer templates and their hard mineral products. The advent of X-ray spectromicroscopy, the method used by De Stasio’s team, is opening a new window into this intriguing interplay of nature.

Insight into the interconnections between organic and inorganic materials at the molecular level, De Stasio suggests, could well come about with the new X-ray microscopy techniques. Ultimately, the new results may help humans learn how to mimic the processes that result in nature’s material science masterpieces, substances like shell and bone, things that have never before been made from scratch by human hands.

“The hope is that this may inspire new routes for biomimetic synthesis,” Banfield says.

De Stasio notes that mollusks, combining a polymer matrix and a mineral, produce shells that are 3,000 times harder than the mineral alone. Scientists have yet to make any composite material that is tougher than any of its individual components.