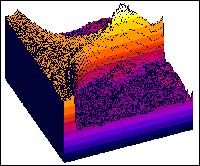 The peaks on this three-dimensional plot indicate a high concentration of liposomes forming in a microchannel.

Nanotechnology is about making improved products by building them from components hundreds of times smaller than a human blood cell. But how do you put things together at such a tiny scale? One way is to create the right conditions, so that they assemble themselves.

For example, a new method for producing uniform, self-assembled nanocells has been developed by researchers at the National Institute of Standards and Technology (NIST). Reported in the March 10 issue of the Journal of the American Chemical Society, the method may have applications as an improved method for encapsulating drug therapies. A patent application has been filed.

Current bulk methods for producing nanocells called liposomes—a type of artificial cell—produce particles in a wide range of sizes. The sizes must be sorted and filtered before being used for drug delivery, since dosage depends critically on size.

The new NIST method uses micrometer-size channels etched into a device to produce self-assembled liposomes of specific sizes from as large as about 240 nanometers (nm) to as small as about 100 nm. A stream of natural fats (lipids) dissolved in alcohol is directed at an intersection of two channels that looks like a micro version of a four-way stop. A water-based liquid containing medicines or other substances is sent toward the lipid stream from two opposing directions. Rather than mixing with the water, the lipids surround it, forming self-assembled nanocells.

Controlling flow rates in the microchannels produces nanocells of specific sizes. Faster flows produce smaller cells. Medicine-filled liposomes made in nanosizes should allow for more accurate drug delivery. In particular, liposomes have been studied for years as a way to concentrate the effectiveness of cancer chemotherapy while minimizing harmful side effects.