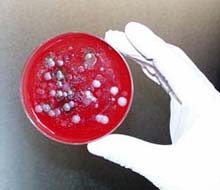 Anthrax is nasty stuff. An environmental engineer at WUSTL uses smart catalysts in his device that can detect the airborne presence of anthrax and other bioweapons and disable it.

An environmental engineer at Washington University in St. Louis with his doctoral student has patented a device for trapping and deactivating microbial particles. The work is promising in the war on terrorism for deactivating airborne bioagents and bioweapons such as the smallpox virus, anthrax and ricin, and also in routine indoor air ventilation applications such as in buildings and aircraft cabins.

“When the aerosol particles come into the device they are charged and trapped in an electrical field,” Biswas explained. “Any organic material is oxidized, so it completely deactivates the organism.”

On the walls of the device, Biswas has coated nanoparticles that catalyze the oxidation. These nanoparticles are “smart” objects that are turned “on” and “off” by irradiation.

“This smart catalyst is unique,” Biswas said. “If we should encounter some organism that is very difficult to degrade, I can engineer my smart catalysts to function so that they will oxidize those molecules.”

Biswas and his collaborators have tested the device using non-potent polio virus and have achieved 99.9999 percent efficiency. He currently is collaborating with the Midwest Regional Center of Excellence for Biodefense and Emerging Infectious Diseases Research (MRCE) and his Washington University colleague, Lars Angenent, to identify the mechanistic pathways of biomolecular degradation.

Washington University in St. Louis has a core group of six faculty who are mainstream aerosol researchers, and work on different aspects related to Aerosol Science and Engineering. This nationally and internationally recognized group of scientists, one of the largest groups in U. S. universities, studies the synthesis and environmental impact of nanoparticles, atmospheric pollution at the regional and global scales, and develops the next generation of instrumentation for detection of these particles, as well as several environmental nanotechnology applications.

Biswas was part of a special colloquium, “Research in Aerosols and Air Quality,” held March 2, 2004, at Washington University. The event was organized under the university’s Sesquicentennial Environmental Initiative wherein world-renowned researchers reported the latest findings in the aerosol engineering field. The colloquium, was part of a series of environmental dialogues held in honor of Washington University’s 150th anniversary.