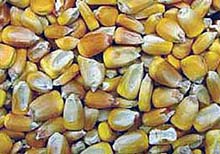 A team of scientists reports a major advance in seqencing large genomes. And they have done their work on the plant that made the Midwest famous - maize, or corn, if you will

Cutting corn down to size

A team of scientists that includes a Washington University in St. Louis biologist, has evaluated and validated a gene-enrichment strategy for genome sequencing and has reported a major advance in sequencing large genomes. The team showed a six-fold reduction of the effective size of the Zea mays (maize or corn) genome while creating a four-fold increase in the gene identification rate when compared to standard whole-genome sequencing methods.

A team of scientists reports a major advance in seqencing large genomes. And they have done their work on the plant that made the Midwest famous – maize, or corn, if you will.
The Maize Genomics Consortium reported their results in the December 19, 2003 issue of Science magazine. Karel R. Schubert, Ph.D., Washington University affiliate professor of biology in Arts & Sciences, was the principal investigator of the study. Schubert is vice president of technology management and science administration at the Donald Danforth Plant Science Center in St. Louis.

The Maize Genomics Consortium, consisting of The Donald Danforth Plant Science Center, The Institute for Genomic Research (TIGR), Purdue University, and Orion Genomics, was awarded a two-year, $6 million plant genome grant on September 20, 2002 by the National Science Foundation (NSF) to develop and evaluate high-throughput and robust strategies to isolate and sequence maize genes. The two gene-enrichment methods used in the research published in Science are methyl-filtration and high-Cot selection.

According to Schubert and W. Brad Barbazuk, Ph.D., senior bioinformatics specialist and assistant domain member, both at the Donald Danforth Plant Science Center, the overall goal of the pilot sequencing project in maize is to derive an effective strategy to sequence the maize genome. To meet this goal, the Maize Genomics Consortium will generate approximately 800,000 total sequence reads using the methyl-filtration and high-Cot methods, with the results published in Science describing the analysis of the first 200,000 sequence reads.

It is a challenging effort to sequence the maize genome, as its size and structure preclude using the standard whole-genome methods for sequence analysis and alignment. At about 2 to 3 billion base pairs, the maize genome is estimated to be 20 times larger than Arabidopsis, an experimental plant that is the first plant genome to be completely sequenced. However, maize probably has only twice as many genes as Arabidopsis. The rest of the maize genome is made up of a large amount of highly repetitive DNA including many mobile DNA elements. Unlike Arabidopsis genes, the maize genes are not spaced evenly throughout the genome but instead are clustered in “islands” floating in a large “sea” of repeat-sequence DNA.

To sequence these “islands”, the Maize Consortium used two methods for gene-enrichment, methyl-filtration and high-Cot selection. The methyl-filtration method was developed at Cold Spring Harbor Laboratory in Long Island, New York, and has been exclusively licensed to St. Louis-based Orion Genomics. It is based on the finding that highly repetitive DNA is modified (methylated) while genes are largely free of such modification. The well-established high-Cot selection method was applied at Purdue University and exploits the fact that gene sequences are in relatively low abundance compared with the large amount of repeated non-genic sequences. These methods target overlapping, but non-identical fractions of the genome that are highly enriched for genes sequences.

Washington University in St. Louis is part of the alliance that makes The Donald Danforth Plant Science Center. The Center is a not-for-profit research institution that was founded in 1998 as the product of a unique and innovative alliance joining the University of Illinois at Urbana-Champaign, the Missouri Botanical Garden, the University of Missouri-Columbia, Monsanto Company, Purdue University, and Washington University in St. Louis. The mission of the Danforth Center is to increase understanding of basic plant biology; to apply new knowledge for the benefit of human nutrition and health and to improve the sustainability of agriculture worldwide; to facilitate the rapid development and commercialization of promising technologies and products; and to contribute to the education and training of graduate and postdoctoral students, scientists, and technicians from around the world. Please visit www.danforthcenter.org for additional information.