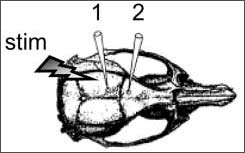 Scientists have created a mouse model for migraine headache that may serve as an invaluable tool for future study of these debilitating headaches that are often accompanied by severe neurological symptoms. The research, published in the March 4 issue of Neuron, is a major step towards development of more successful treatments targeted at specific neurobiological events that underlie migraines.

Migraine is a common, chronic disorder characterized by recurrent disabling headaches. Approximately one-third of migraine sufferers have headaches preceded by a transient neurological aura of flashing jagged lights and pins and needles. Researchers from Leiden University Medical Centre in The Netherlands and the University of Padova and CNR Institute of Neuroscience in Italy examined a rare subtype of migraine called familial hemiplegic migraine (FHM) that is identical to other types of migraine except it is also associated with hemiparesis, weakness on one side of the body. FHM is associated with specific genetic mutations in a gene for a calcium channel protein that is involved in neuronal excitability. The researchers used a sophisticated genetic technique to create mice with a mutation seen in humans with FHM. Compared to normal mice, the migraine mice showed activation of calcium channels by weaker stimuli with consequent enhanced calcium entry into neurons, increased release of excitatory neurotransmitters, and increased susceptibility to cortical spreading depression (CSD), the phenomenon that underlies the migraine aura. “Previous studies have indicated that CSD is a wave of intense neuronal activity along the surface of the brain, followed by a long-lasting neuronal suppression. Our results suggest that in the migraine brain cortical hyperexcitability results in an increased susceptibility for CSD and aura,” explains study coauthor Dr. Arn M.J.M. van den Maagdenberg.

The authors suggest that further studies are needed to identify a concrete link between FHM mutations, CSD, and activation of pain in the brain. According to coauthor Dr. Daniela Pietrobon, “Other studies have implicated CSD as a trigger for the pain associated with migraine. Drugs which reduce the activity of calcium channels in the migraine brain may make the brain more resistant to CSD and may thus be able to prevent migraine attacks.” The FHM migraine mouse will provide a unique tool for future studies into the mechanisms of migraine as well as a promising model for testing new treatments aimed at preventing migraine by reducing hyperexcitability and preventing CSD.