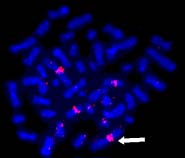 A nanoscale imaging technique that could improve the reliability of an important diagnostic test for breast cancer, and other biomedical tests, is described by National Institute of Standards and Technology (NIST) researchers in the Feb. 11 online issue of Nucleic Acids Research.

The method involves attaching fluorescent particles just 15 nanometers (billionths of a meter) in diameter to particular sections of DNA, followed by analysis of the intensity of the fluorescence signal and other properties. These particles, called quantum dots, have unique electronic and optical properties that make them easier to detect than conventional fluorescent tags used in biomedical research. The NIST team demonstrated that quantum dots give off signals that are 200 to 1,100 percent more intense than those from two types of conventional tags, and also are more stable when exposed to light.

The new technique is a spin-off of an ongoing NIST effort to develop standards for a test that identifies breast cancer patients who would benefit from a particular drug therapy. The standards are expected to help reduce uncertainty in the so-called FISH (fluorescence in situ hybridization) test that detects a particular gene. Excess copies of this gene result in over-production of a protein and cause tumor cells to grow rapidly. Potentially, quantum dots could be used to tag these genes.

The quantum dots used in the study are commercially available aggregates of semiconductor materials, which, even though they contain hundreds to thousands of atoms, behave like single atoms electronically. Quantum dots absorb light efficiently over a wide frequency range and re-emit it at a single wavelength (or color) that depends on particle size.

The NIST research is supported in part by the National Institutes of Health.