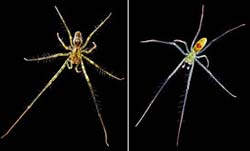 Two of many closely related spider species unique to the Hawaiian Islands. One group of spiny leg species has diversified into similar sets of species on different islands, as illustrated by the two spiders shown, Tetragnatha pilosa on the left and T. kauaiensis on the right. Despite their different appearances, they are very closely related. (Photos © 2004 David Liittschwager and Susan Middleton) <br>

About 5 million years ago, the first spiny-legged Tetragnatha spider landed on what is now known as the Hawaiian Islands, with subsequent generations evolving into different species to fill in specific niches in various habitats. Now, these spiders provide evidence for nature’s propensity for generating diversity in a systematic way.

In a new paper published in the Jan. 16 issue of Science, University of California, Berkeley, biologist Rosemary Gillespie uses genetic detective work to describe how these spiders, otherwise common streamside inhabitants throughout the world, diversified to fill an entire spectrum of habitats in the Hawaiian Islands. Along the way, she challenges the assumption that the formation of communities through evolutionary processes in the remote Hawaiian archipelago is different from the way communities are assembled through immigration on a large continent.

“The Hawaiian Islands are often considered to be so unusual and remote that what happens there cannot be applied to other places,” said Gillespie, professor of insect biology, director of the Essig Museum of Entomology at UC Berkeley and author of the paper. “What I’m showing is that the same kinds of things happen on these islands as elsewhere; it’s just that evolution plays more of a role.”

Because Hawaii consists of a chain of islands that formed chronologically, Gillespie was able to study the spiders’ adaptive radiations over time in what she calls a “natural time-series laboratory” of evolution. The oldest island, Kauai, was formed 5 million years ago, followed in age by Oahu, Molokai, Lanai, Maui and finally the big island of Hawaii, the youngest island at less than 1 million years old.

Gillespie found 16 species of Tetragnatha spiders, all of which have abandoned web building, actively hunt their prey and have long spines along their legs. By examining the spiders’ DNA, she determined that the 16 species descended from one common ancestor that began life on the oldest island of Kauai 5 million years ago, early in the island’s history. She studied the ecological roles of different spiders, recording their behavior patterns and noting which insects they fed upon. She also used the DNA of the spiders to create a family tree charting the evolutionary history of the Tetragnatha species in Hawaii.

At the same time, Gillespie found that when niches become available on a new island, spiders from other islands can move in to fill the spots. For example, the small brown types dispersed as new islands formed to establish new species.

“There appears to be a race between which species can fill the empty slot in the community first,” said Gillespie. “Is it going to be a similar type from another island by immigration, or a different type from the same island by evolutionary change and adaptation?”

One of the most interesting outcomes of the study was that the mountain with the highest diversity of spider species is Mt. Haleakala on Maui, a surprising finding since it is neither the oldest nor the largest mountain.

The study results suggest a possible explanation: Species colonize new islands as they form. Over the years, species keep piling on, as a result of both evolution and adaptation, resulting in more species than the land mass can actually maintain over the long term. On older islands, species jostle and compete for space and other resources until an equilibrium is reached, so that there is only a single ecological type on any of the older mountains.

The result is reminiscent of the results scientists have found when studying how mainland communities, if empty, quickly fill in as a result of immigration. Prior studies have shown that more and more species pile in until there are more than the community can hold. At that point, species compete like mad, and, after a short period, only those most adapted to living together remain. Gillespie concludes that there are fundamental similarities between the largely ecological processes that govern the formation of communities on a continent and evolutionary process that dominate community formation in the Hawaiian Islands. “This study suggests that the process of community assembly – the way niches are filled by a set of co-adapted species – is governed by universal principles,” she said.

In the process of studying these spiders, Gillespie charted numerous species that had never before been documented. The varied habitat types on the islands, cold and wet areas closely juxtaposed with hot and dry, have provided a rich tapestry of species diversity. The flip side of such extraordinary diversity that evolved in isolation is its vulnerability to change and to invasive species that are now flooding in as a result of human traffic, Gillespie noted.

“The danger of species extinction is humongous in these islands,” she said. “Part of what I’m doing is documenting these species, which have adapted so well to specific habitats, and which clearly play a key role in the maintenance of the mountain environments that define the beauty of the Hawaiian Islands. Without an understanding and recognition of this role, these species may easily go extinct without people knowing what was there, or why it was so special.”

The study was supported by the William M. and Esther G. Schlinger Foundation and the National Science Foundation.