Purdue chemist &#146;mussels&#146; in on secrets of natural adhesives 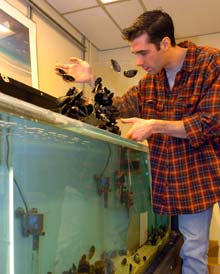 Jonathan Wilker of the Purdue University chemistry department examines a group of saltwater mussels. The natural glue these creatures make to anchor themselves to the sea floor has surprising chemical characteristics and could have applications in medicine and industry. (Purdue News Service photo/David Umberger) <br>

Purdue University scientists have found the glue that saltwater mussels use to affix themselves to rocks is a subject worth sticking to, both for its pure scientific interest and for its potential applications in medicine and industry.

Jonathan Wilker and his research group have discovered that the formation of mussel adhesive requires iron, a metal that has never before been found in such a biological function. While the discovery is valuable for its scientific merit, it also could impact the market as well, leading to surgical adhesives, rustproof coatings and antifouling paints to defeat barnacle adhesion.

“These animals appear to use iron in a way that has never been seen before,” said Wilker, an assistant professor of chemistry in Purdue’s School of Science. “Research based on materials like this one could open up new branches of adhesives research, helping us to do things such as develop new surgical procedures and prevent barnacles from sticking to ships.”

The research appears as the “feature communication” in today’s (Monday, 1/12) issue of Angewandte Chemie International Edition, a leading chemistry journal.

Mussels stick to objects such as rocks, pilings and each other. Up close, it is easy to see the dozens of tiny filaments – often referred to as its beard – that stretch from a mussel, attaching it to its home turf. A mussel has an organ called a “foot” that it extends, attaching each filament to a stationary object with a tiny dab of glue. The foot then repeats the process until it is secure enough to resist the pull of tides, currents and predators.

“It takes about five minutes for a mussel to make an adhesive plaque, and it uses 20 or more such plaques to anchor itself,” Wilker said. “A mussel can easily establish itself overnight.”

Key to the mussel’s tenacity is the plaque, or glue, that holds these filaments in place, and it is the chemistry of this glue that Wilker and his fellow researchers are studying. Metals such as iron are usually needed only in trace quantities for life, but Wilker’s research has demonstrated a novel role for metals: biomaterial formation.

“This is the first time a transition metal has been found to be essential for the formation of an amorphous biological material,” he said. “We will be exploring other organisms that produce materials, such as barnacles, kelp and oysters, to see if there is a common theme in the synthesis of biological materials.”

Wilker first became interested in this subject while on break from academic work, pursuing one of his favorite hobbies – scuba diving.

“I was looking at mussels and barnacles while diving and wondered how they stick,” he said. “I checked the literature for an answer and saw that many of the details for these processes were not known.”

This simple question of how mussels stick has turned into a years-long project for Wilker, occupying him since he arrived at Purdue in August of 1999. His work has uncovered a new aspect of bioadhesives, most of which are based upon proteins. Prior to curing, these protein mixtures can resemble gelatin.

“The mixture we extract from mussels has a consistency similar to gelatin,” Wilker said. “When we add iron, the mussel proteins cross-link or ’cure’ and the material hardens. Other bioavailable metal ions do not appear to bring about this cross-linking. Our spectroscopic experiments show how this iron binds the proteins for cross-linking, turning them into glue.”

Mussels obtain iron by filtering it directly from their surrounding water. As with other bivalves, such as oysters and scallops, mussels obtain all the nutrients they need in this fashion.

Wilker said that mussels can affix themselves to nearly any surface, including Teflon, the same substance used to make non-stick coatings for frying pans.

“This material’s ability to adhere to many surfaces and its biological origin may makeit useful in medical applications,” Wilker said. “This glue could be modified for use in wound closure, nerve reconstruction, or when one might need a scaffold upon which to grow cells and build new tissue.”

Another potential application could be in rustproof coatings, often used in outdoor settings such as the exteriors of buildings and cars.

“There are coatings on the market made from polymers, but none are ideal,” Wilker said. “By using this glue to coat surfaces, we may have a natural rustproofing compound.”

Further research also could reveal a less environmentally damaging way to keep barnacles and mussels from attaching themselves to ship hulls, where they increase drag and reduce sailing speeds.

“Copper-based paints are often used on ship bottoms to kill barnacles in their larval state and prevent them from attaching,” Wilker said. “But this use of copper-based antifouling paints has harmed the marine ecosystem. Copper levels in most harbors are through the roof nowadays. Obviously this is a major environmental problem, and in the future we might be in a position to help solve it.”

Wilker said he is excited to work in such a fascinating area of research early in his career, one that could possibly yield so many benefits.

“We may be able to take parts of this glue and use them to make materials that have controlled electronic, magnetic or optical properties,” he said. “Mussel glues have provided insights on new aspects of materials design. This research lies at a point where chemistry, biology, engineering and materials science intersect, and that’s exciting.”

This research was sponsored in part by a National Science Foundation CAREER Award, the Arnold and Mabel Beckman Foundation, the Alfred P. Sloan Foundation and the Purdue Research Foundation.