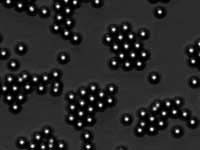 This time-lapse movie depicts clustered beads breaking up and dispersing when protein is added to a solution. The protein binds to receptors in the membrane coating the glass beads, altering the random clustering of beads and making the protein-receptor interaction easy to see. <br>(Credit: Jay Groves/UC Berkeley) <br>

Microscopic glass beads wearing coats identical to the outer membrane of a cell provide a powerful assay for proteins that bind to cell membranes, such as protein drugs or drug candidates, according to chemists at the University of California, Berkeley, and Lawrence Berkeley National Laboratory (LBNL).

The membrane-coated beads, complete with receptors that dot the surfaces of real cells, also would make a sensitive detection system for viruses or protein toxins like those produced by cholera, anthrax and tetanus bacteria.

The detection system is extremely sensitive – when proteins latch onto receptors in the membrane, the coated beads disperse like pool balls after a break. This dispersal can easily be seen through a microscope, making robotic screening possible.

“There’s a big demand for membrane-based detection systems by pharmaceutical companies and researchers, but a final bottleneck is always getting a biochemical measurement from the membrane change – detecting the change,” said Jay T. Groves, professor of chemistry at UC Berkeley and a faculty scientist in the Physical Bioscience Division of LBNL. “The hard thing about detecting molecules on surfaces is that a surface is intrinsically two-dimensional, and there simply are not many molecules there to detect. For this reason, sophisticated techniques have generally been required to analyze molecular binding events on membrane surfaces.

“With our technique, you get the best of both worlds. We have single molecule interactions that you can see without a sophisticated instrument.”

The beads essentially amplify the tiny effects caused by binding of a protein to a receptor, he said. Groves and biophysics graduate student Michael M. Baksh explain their detection scheme in a paper appearing in the Jan. 8 issue of Nature.

Groves is a member of the California Institute for Quantitative Biomedical Research (QB3), a cooperative effort among UC Berkeley, UC San Francisco and UC Santa Cruz to leverage strengths in the physical and biological sciences and engineering to improve human health and the environment.

Such a detection system or assay would be of great interest to the pharmaceutical industry, which needs to screen drug candidates for how well they bind to specific membrane-bound receptors, Groves said. That’s because many drugs as well as infectious disease organisms target memranes.

Because companies typically screen hundreds of thousands of compounds – and occasionally a million of them – at a time, an automated and easy-to-read assay would save time and money.

Groves has been working on ways to simplify the study of cell membranes, and several years ago came up with a “MembraneChip” – a piece of cell membrane, complete with receptors, attached to a silicon electronic chip that could read out a change in the membrane caused by the binding of a protein with its receptor. Groves patented the device and founded a company, Synamem Corp., that licensed the original technology to look for new drugs that suppress the body’s immune response or fight infection.

“This new technique is a MembraneChip on a particle, and it will probably replace the MembraneChip in many applications because it is very, very high throughput,” he said.

Cell membranes consist of two layers of fatty molecules called lipids. The lipid bi-layer protects the cell contents but, just as importantly, provides a sea in which big molecules – receptors – float as entry portals for specific proteins. What Groves and many others have tried to do is find an easy way to determine how well a given protein binds to a membrane-bound receptor. Drug companies, for example, want chemicals that fit like a hand in a glove, to either stimulate or block a receptor.

“There is tremendous interest in measurement and analysis of molecular binding events that occur on cell membrane surfaces,” he said. “A substantial majority of therapeutic drug targets reside in the membrane, as do recognition targets used by viruses to infect.

“At present, though, it is very difficult to measure binding interactions at membrane surfaces. Elaborate techniques such as surface plasmon resonance (SPR) or total internal reflection fluorescence (TIRF) must be employed.”

After reading about recent research on colloids – microscopic particles that cluster in interesting ways – Groves thought that the degree of aggregation of colloids might make a good indicator of receptor binding affinity, if the colloidal particles were coated with a membrane and receptors.

His experiments showed that a colloidal suspension of membrane-coated beads does react to the binding of a protein and receptor. When no proteins are present, the beads wander randomly through a thin, flat layer of fluid, clustering in short-lived groups of a dozen or more.

“The membranes make the beads slippery, so they don’t stick together but slide around one another,” Groves said. “The clumps are just random clusters.”

After addition of a protein that fits into a receptor, bead movement is disrupted so that the random clusters shrink in size. The response is not all or nothing, but is more pronounced the more tightly the protein fits into the receptor.

Because proteins that do not fit into a receptor do not elicit this reaction, the system provides a sensitive screening test for presence of specific proteins.

“The colloid is poised near a phase transition, making it very sensitive to single particle interactions too small to measure individually,” he said. “The population behavior of the colloid gives us subtle information about membrane interactions not accessible in other ways.”

The beads are off-the-shelf glass (silica) spheres 5 microns across, about 1/20th the width of a human hair. The membrane is only 5 nanometers thick, 1,000 times smaller than the diameter of the bead.

In practice, a robotic scanner would need to look at a window only a few millimeters square and calculate the pair-wise distances between the centers of all beads. The shape of this distribution tells how much the beads are aggregating, and thus indicates the binding affinity of a protein to a receptor. Groves himself plans to use the membrane-coated beads to study the dynamics of receptors in cell membranes.

“The science of this technique is intriguing,” writes Thomas M. Bayerl in a commentary appearing in the same issue of Nature. Bayerl is at the Physical Institute at the University of Würzburg, Germany. “This work by (the UC Berkeley/LBNL team) may open the door to the automated characterization of a wide range of complex molecular interactions that are at present poorly understood.”

A third author of the paper is Michal Jaros, a visiting Fulbright graduate student fellow at UC Berkeley who has since returned to Charles University in Prague in the Czech Republic.

The work was supported by the U.S. Department of Energy and by a Burroughs Wellcome Career Award in the Biomedical Sciences to Groves.