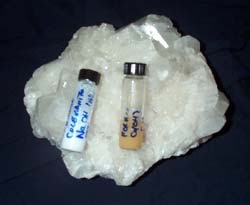 A vial containing ribose that turned brown after 15 minutes. A second vial contains ribose that survived, for over two months, because of the presence of colemanite. A sample of the mineral colemanite from Death Valley is in the background <br>Credit: Steven Benner, U of Florida

Researchers at the University of Florida say they have shown that minerals were key to some of the initial processes that formed life on Earth.

Specifically, a borax-containing mineral known as colemanite helps convert organic molecules found in interstellar dust clouds into a sugar, known as ribose, central to the genetic material called RNA. This announcement provides a key step toward solving the 3-billion-year-old mystery of how life on Earth began. The findings will appear in Friday’s issue of the journal Science. Steven Benner, Alonso Ricardo, Matthew Carrigan and Alison Olcott built on a famous experiment done 50 years earlier by Stanley Miller that is found in many textbooks. In 1953, Miller showed that electric sparks in a primitive atmosphere made amino acids, the building blocks of proteins.

Miller’s experiment failed to identify sugars that were needed for genetic material, however. “The sugar ribose can be formed from interstellar precursors under prebiotic conditions,” said Benner, who led the research funded by NASA, the National Science Foundation and The Agouron Institute in Pasadena, Calif. “But ribose is too unstable to survive under Miller’s conditions.” Ribose, like most sugars, turns into tar if not handled carefully. “It is like baking a cake too long,” said Benner, a UF distinguished professor of chemistry and anatomy and cell biology. In 1995, Miller gave up trying to make ribose prebiotically, writing: “The first genetic material could not have contained ribose or other sugars because of their instability.”

Benner, who also is a member of NASA’s Astrobiology Institute, did the first experiments as an instructor at an international geobiology course last summer funded by the Agouron Institute and held at the University of Southern California Wrigley Institute for Environmental Studies. “We asked two questions. First, what simple organic molecules might have been present on early Earth as starting materials to form ribose? Then, what might have been present on early Earth to capture ribose and keep it from burning up like overcooked cake?” Benner said.

To identify simple organic molecules that might be the starting materials, Benner turned to compounds known to exist in interstellar dust, such as formaldehyde, used to preserve tissue. “Formaldehyde may not seem to be a good starting point for the life that we know,” he said. “But it is simple. With only one carbon atom, one oxygen atom and two hydrogen atoms, there is a lot of formaldehyde to work with in the cosmos.”

Benner and his team showed that formaldehyde, with other interstellar compounds, could form ribose and other sugars when treated in the presence of base materials such as lime, a material used to adjust the pH level of lawns, among other things. Lime was effective, but the ribose decomposed soon after it was formed.

Recognizing that ribose had a particular chemical structure that allowed it to bind to minerals containing the element boron, they turned to another substance called colemanite. “Colemanite is a mineral containing borate found in Death Valley,” he said. “Without it, ribose turns into a brown tar. With it, ribose and other sugars emerge as clean products.” Benner then showed similar reactions with other borate minerals, including ulexite and kernite, which is more commonly known as borax.

Benner and his team are the first researchers to succeed in making significant amounts of ribose under these early conditions.

Joseph Piccirilli, a biological chemist at the Howard Hughes Medical Institute and the University of Chicago, said Benner’s work “has simplicity and brilliance.”

“Organic chemists have long known that borate complexes with compounds like ribose,” Piccirilli said, “and prebiotic scientists have long believed that minerals on the early Earth played an important role in the origin of life.” Until now, “no one has put the two ideas together,” he said.

“We are not claiming that this is how life started,” Benner stressed. “We are saying that we have demonstrated a recipe to make a key part of life without any biochemical machinery. The more recipes of this type that can be found, the more clues we have about how life could have actually gotten started on the primitive Earth.”

While best classified as basic science, the work has practical biological and medical value. “Curiously, thinking about how life originated and what form it might take on other planets helps us design new tools for disease diagnostics and therapy,” Benner said. Diagnostic tools enabled by Benner’s work seeking alternative life forms are used today in the clinic to monitor the load of the viruses that cause AIDS and hepatitis C.

The work also complements other research Benner is conducting that focuses on ancient forms of life on Earth. In a September report in Nature, Benner and his collaborators deduced the structure of a protein found in a bacterium that lived several billion years ago and resurrected the ancient protein. By studying it in the laboratory, the group inferred the ancient bacteria lived in a hot spring at about 150 degrees Fahrenheit.

With the prebiotic experiments, Benner said, “we are working forward in time, from the origin of the planet to the first life. With experiments with ancient proteins, we work backwards in time, from the modern world to the most primitive of bacteria.” The group’s goal, he said, is to have the two meet in the middle.