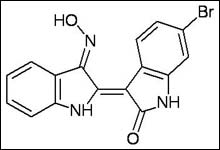 A newly discovered molecule, nicknamed "BIO", safely maintains human embryonic stem cells in a pluripotent state. Its chemical structure is pictured above. The molecule was originally identified and purified from the purple dye extracted from the mollusk Hexaplex trunculus

Human embryonic stem cell (HESC) lines, or cultures, in the U.S. are not suitable for use in the budding field of regenerative medicine. Their creation using mouse feeder cells, a specialized growth medium, allows scientists to study their basic characteristics, but ultimately the HESCs are too risky to develop in applied medicine because mouse-associated viruses possibly contaminate them.

Now, Rockefeller University researchers in collaboration with two European scientists, have discovered a way around this problem: they’ve devised a system for maintaining existing or new human stem cell lines that excludes the need for troublesome mouse feeder cells.

The findings also have an intriguing underpinning. A marine animal belonging to the gastropod mollusk group is the original source of the compound now in use in the new feeder-free system. The natural molecule from which the new compound has now been synthesized has been harvested for over 2500 years from the creature, known as the red mollusk, as a coveted purple dye.

The identification of the small molecule, pharmacological inhibitor system in stem cells, led by Ali Brivanlou, Ph.D., head of the laboratory of molecular vertebrate embryology and his research associate, Noburo Sato, Ph.D., so far demonstrates superior stability over other methods designed to circumvent the need for mouse feeder cells. Nature Medicine features Brivanlou, Sato and their colleagues’ results in its January 2004 edition. And though still early in the team’s experiments, the stem cells appear to progress and differentiate normally after the compound is removed.

This new system for maintaining pluripotency could be a providential break for basic researchers and clinicians investigating the potential of HESCs, as it is a potential first step in providing an unlimited source of tissue transplant if HESCs’ potential comes to fruition in clinical medicine.

It works like this: a newly purified compound from the purple dye of marine red mollusks – called 6-bromoindirubin-3’-oxime, or by its working acronym, “BIO”- has been shown by Rockefeller scientists to indirectly activate a crucial gene expression mechanism, called the Wnt signaling pathway, in embryonic cells. Wnt signaling occurs when the new compound inhibits a specific protein kinase in embryonic cells, called GSK-3. This enzyme plays an essential role in many normal and disease states from development to neurodegenerative disorders. It is involved in numerous pathways including a highly conserved and important one called the Wnt signaling pathway. When GSK-3 is inactivated, Wnt is active. Chemical inhibition of GSK-3 thus mimics activation of Wnt and this keeps HESCs in an active, undifferentiated state – one of the crucial basic qualities of embryonic stem cells.

“We know precisely how this compound works – that is, on which enzymes and pathways – and that it is very controllable,” says Brivanlou. “This knowledge makes the compound useful not only in stem cell research but also, as we are already seeing in the lab, numerous other research areas.”

The challenges of HESC applied research are well known, along with the possible rewards. Cultured stem cells must be capable of self-renewal in an undifferentiated state in order to be truly useful.

Brivanlou, a comparative embryologist who studies the basic molecular aspects of very early vertebrate embryonic development, studies embryonic stem cells to determine whether they truly possess the unique qualities with which they are credited. He along with his scientific colleagues already developed a set of research standards for determining what qualifies as an embryonic stem cell, and what remains to be confirmed about them before clinical researchers safely can consider using them in human research. The standards were published in Science in May 2003.

He also revealed, in 2003, a set of genetic markers for human embryonic stem cells, showing that they do not share a majority of their gene expression patterns with mouse embryonic stem cells, and that there is a highly specific genetic definition of embryonic cells that makes them stem cells – in other words, those cells that can give rise to all body cell types. This research was published in Developmental Biology in July 2003.

These accomplishments were deliberate and systematic. The new system hailed from an unanticipated source. Early in 2003, Laurent Meijer, a biochemist from the Roscoff Marine Biology Institute in France, while on sabbatical at Rockefeller University, studying protein kinases involved in neurodegenerative diseases in Dr. Paul Greengard’s laboratory, asked Brivanlou to test a new compound he and his Greek colleague, Leandros Skaltsounis, had derived from naturally- occurring indirubin of Mediterranean mollusks. The two scientists wanted to know if this new compound could act as a potent and selective pharmacological inhibitor of GSK-3, and therefore as potentially useful against neurodegenerative disorders.

“Protein kinases are very promising targets for the discovery of new therapeutic agents,” says Meijer. “In particular, pharmacological inhibitors of GSK-3 have great potential for application to treat Alzheimer’s disease and other neurodegenerative disorders, as well as sleep disorders and depression.” (There are 520 protein kinases encoded in the human genome.)

Brivanlou and his colleague Alin Vonica, M.D., Ph.D. confirmed that the synthetic compound was able to mimic Wnt activation in the classical model of frog early embryonic development. In the process, Brivanlou also discovered that the compound safely could arrest differentiation of stem cells in frog embryos, while allowing them to continue to self-renew.