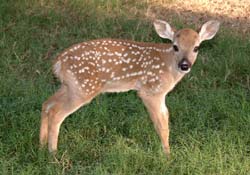 In what is believed to be the first success of its kind, researchers at the College of Veterinary Medicine at Texas A&M University have cloned a white-tailed deer. A fawn, named “Dewey,” after Duane Kraemer, one of the researchers, was born to a surrogate mother several months ago.

The fawn is believed to be the first successfully cloned deer and Texas A&M is the first academic institution in the world to have cloned five different species. Previously, researchers at the College of Veterinary Medicine have cloned cattle, goats, pigs and a cat.

The announcement of the successful deer cloning was delayed until DNA analysis could be performed to confirm genetic identity. This breakthrough in deer cloning at the College of Veterinary Medicine was a joint project with Viagen, Inc. and may be useful in conserving endangered deer species including the Key West deer of Florida, researchers say.

“Dewey is developing normally for a fawn his age and appears healthy,” said Dr. Mark Westhusin, who holds a joint appointment with the Colleges of Veterinary Medicine and Agriculture and Life Sciences and is the lead investigator on the project.

“A DNA analysis confirmed that Dewey is a clone, i.e. a genetic copy of the donor,” adding that “future scientific advances resulting from the successful cloning of the deer are expected.”

The clone was produced using fibroblast cells which were isolated from skin samples derived from a deceased white-tailed buck, expanded in culture then frozen and stored in liquid nitrogen. White-tailed deer oocytes were collected from ovaries of does and matured in vitro.

Two teams of research scientists led by Westhusin and Dr. Duane (Dewey) Kraemer of Texas A&M University and Dr. Charles Long of Viagen Inc. performed the nuclear transfer procedures and transfer of the cloned embryos. Dewey is under the medical care of Dr. Alice Blue-McClendon, a veterinarian at the College of Veterinary Medicine.

“With each new species cloned, we learn more about how this technology might be applied to improving the health of animals and humans,” said Westhusin.

In December 2001, the first cloned cat was born at the College of Veterinary Medicine. Other cloned animals born at the university include several litters of pigs, a Boer goat, a disease-resistant Angus bull, and the first Brahma bull.

“The knowledge we gain from cloning these animals could greatly affect several areas of science and medicine,” said H. Richard Adams, dean of the College of Veterinary Medicine. “With each successful cloned species, we learn more about cloning procedures and how to make the process more efficient.”

White-tailed deer represent the most abundant, wide-spread big game animal in North America. They are popular game animals and are prized for their meat and antlers. Deer farming to produce meat and antlers is common in many parts of the world, including Texas. When breeding animals die or are harvested as a result of hunting, cloning may provide a valuable tool for conserving the genetics of superior animals.

Established in 1916, the College of Veterinary Medicine at Texas A&M is one of the world’s largest veterinary colleges and is an international leader in animal health care and research.