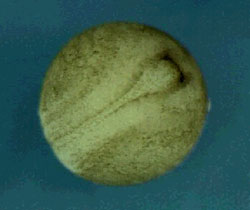 A single gene appears to kick off a critical step in the development of the early embryo – the formation of the brain and spinal cord – and thus may offer a way to screen for fetal spinal cord defects such as spina bifida.

Neural tube defects, including spina bifida – an open spinal cord – and anencephaly, or lack of a complete brain, are among the most common serious birth defects in the United States. While the incidence has gone down in this country thanks to educational efforts encouraging pregnant women to take folic acid supplements, some 30 percent of neural tube defects appear to have a genetic cause unrelated to folic acid deficiency.

Reporting in the December 16 issue of Current Biology, researchers at the University of California, Berkeley, and the University of Pittsburgh, establish that activation of a lone gene, called “shroom,” triggers specific cells in the embryo to bend, initiating a curling of tissue into a closed neural tube that eventually becomes the spinal cord and brain. Though conducted in frog embryos, the experiments have implications for all vertebrates, including humans.

“These experiments show that, in the embryo, a single protein can bring about this cell shape change, which is staggering, because it implies that this entire bending event can be controlled essentially by controlling a single gene,” said co-author John Wallingford, a former UC Berkeley postdoctoral fellow now an assistant professor in the Department of Molecular, Cell and Developmental Biology at the University of Texas at Austin. “It is absolutely a key step in the process.”

“This finding contributes to an understanding of the genes that are collaborating in the whole process of spinal cord closure,” said co-author Richard Harland, professor of molecular and cell biology at UC Berkeley. “There are both genetic and non-genetic contributors to neural tube defects, so we should certainly expect that there may be polymorphisms in this gene in the population that might lead to a susceptibility for spina bifida. Ultimately, one might be able to screen for susceptibility by looking at these genes.”

In humans, the developing spinal cord closes after the fourth week of pregnancy, but problems occur in about seven to 15 of every 10,000 pregnancies. Studies in mice have turned up more than 50 genes involved in orchestrating this closure, which requires the proper rolling up of a flat sheet of tissue – the so-called neural plate – within the embryo. To achieve this, cells in the plate alter their shape, some of them lengthening, others constricting, still others pushing.

Despite the large number of genes known to be involved in proper neural tube closure, scientists know little or nothing about the normal function of these genes, largely because mice develop inside the mother’s uterus, where it’s impossible to watch the process of neural tube closure.

“There are a lot of mouse mutants and a lot of human occurrences that lead to failure to close the spinal cord completely,” Harland said. “But people pretty much threw up their hands – the whole thing was too complicated to really understand.”

Wallingford decided to look at spinal cord closure in a different animal, the African clawed frog, Xenopus laevis. The process of spinal cord closure is simpler in amphibians and much easier to observe in the laboratory, since the embryo develops outside the body in a dish of pond water, he said.

“By watching a dynamic process like neural tube closure as it’s happening – you take a sheet and roll it into a tube, that’s a very dynamic process – we gain tremendous insights,” Wallingford said.

“In amphibians, there also is not a big contribution from cell division, so we can look at things like cell shape changes, which is the subject of this paper, whereas in the mouse or humans, there is an enormous amount of cell division that contributes to the process, so things are even more complicated in mammals,” Harland added.

The gene Wallingford, Harland and UC Berkeley undergraduate student Saori L. Haigo decided to look at was shroom, short for mushroom, which is the shape of a cross section through a mouse brain that lacks the gene and has an everted rather than normally rolled neural tube. Co-author Jeffrey Hildebrand of the University of Pittsburgh had shown in mice that shroom is required for bending of cells in the hinge area of the embryo. During normal development, these cells express shroom, generating a protein that somehow makes the cells wedge-shaped and taller, causing the neural plate to curl. Other cells contribute, such as nearby skin or epidermal cells, which push and form the fold.

“One of the key things is apical constriction or wedging, and we know that because when we block shroom function, you get pretty much a complete failure – the neural tube stays wide open. It can’t get the job done despite these other motors,” Wallingford said. “We have movies where you can look and see the epidermis pushing on the neural plate, and yet the plate is not bending.

To prove the importance of shroom, Wallingford injected shroom protein into very early frog embryos, before they would be expected to form a neural tube, and the as-yet undifferentiated cells promptly curled up into a tube. Similarly, Hildebrand in Pittsburgh injected the shroom protein into cultured dog kidney cells, which never become wedge-shaped, and they too underwent apical constriction.

“In two different kinds of naive cells we can cause apical constriction by adding shroom, and in neural plate cells, when we take shroom away, we’ve shown that the plate fails to roll into a tube – it fails to bend at the hinge points,” Wallingford said.

“The triumph here is we marry this beautiful genetic experiment in the mouse that shows this gene is important and the beautiful cell biology in the frog that shows exactly why it’s important – what does it actually do.”

The findings provide new avenues of research in both the Harland and Wallingford laboratories.

“We know this gene is a really central location, so by identifying things that regulate its expression, and things that function downstream of it, we can get a better picture of the hierarchy and expand the number of genes we know that are involved in neural tube closure,” Wallingford said. “This gives us more candidates to look for in the human condition.”

The work was supported by the National Institutes of Health, the Haas and McNair Scholars Program at UC Berkeley and the Burroughs Wellcome Fund.