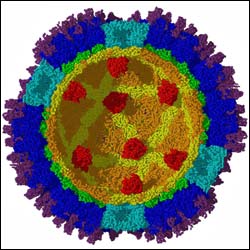 This cross section of a reovirus shows features down to 7.6-angstrom resolution, a scale that has allowed Purdue University’s Tim Baker and his research team to examine the inner features of the viral particle. Visible for the first time within the virus are several tiny "factories," shown here in red, which convert raw materials from a victim cell’s interior into RNA messages instructing the cell to begin manufacturing more viruses. The technology Baker’s team used to examine the reovirus could be used to reveal other viruses’ structures, providing fundamental knowledge important for developing potential antiviral agents. (Photo by Purdue University/Department of Biology) <br>

Purdue University scientists have peered inside a virus and visualized for the first time how it produces and exports genetic materials into a host cell, an advance in fundamental research that also could have implications for the development of antiviral agents.

Using improved microscope technology, a team including Purdue’s Timothy S. Baker and a colleague at Harvard has determined the structure of a reovirus (short for “respiratory enteric orphan” virus) down to the 7.6-angstrom scale, better than twice the 18-angstrom resolution previously available. The newly obtained structure shows not only the molecular composition of the virus but even the position and orientation of those molecules.

“We have visualized the innards of a human reovirus at an unprecedentedly high resolution,” said Baker, who is professor of biology in Purdue’s School of Science. “We can now look at the components of the viral machine to see how they work, which hopefully will give us insight into how it manufactures the genetic weapons it uses to infect cells.”

The reovirus is a member of a viral family that often causes diarrhea in young children. Infections caused by the closely related rotaviruses, for example, are responsible for approximately 1 million deaths annually in developing countries where water shortages can make rehydration difficult for victims.

The research, which appears in the December issue of “Nature Structural Biology,” was performed by a team of Purdue researchers, including first author and graduate student Xing (pronounced SHING) Zhang, graduate student Steve Walker, and cryo-microscopist Paul Chipman. The work is part of a long-standing collaborative study of reoviruses with Max L. Nibert of Harvard Medical School’s Department of Microbiology and Molecular Genetics.

Reoviruses are members of an unusual viral family, in that they do not simply deposit their genetic material into the victim’s cytoplasm, or interior, in order to create new virus particles. Most viruses can do so with relative impunity, but reovirus RNA has a double-stranded structure that a host could perceive as a threat. RNA is a molecule closely related to DNA and exists in a form known as the “messenger molecule” that leads to the translation of genetic information within cells.

“If a reovirus exposed its strands of RNA to a cell’s cytoplasm directly, the cell’s defense mechanisms would destroy them before they could multiply,” Baker said. “So once a reovirus particle invades a cell, it doesn’t open up like other ‘Trojan horse’ viruses do. Instead, it keeps its ‘troops’ inside, where it takes raw materials from the cytoplasm. From them, it manufactures single-stranded RNA instructions that order the cell to transform itself into a virus-producing factory.”

These single strands of RNA are assembled within the virus in part by a protein molecule called lambda-3 that operates somewhat like a printing press. The raw materials are drawn like blank paper through a hole in the protein, which also contains a loop of the virus’ double-stranded RNA. Like a printing cylinder that contains a master copy of a book’s page, the protein uses the viral RNA loop again and again to generate single-stranded RNA messages from the raw materials. The single strands, which can go unrecognized as a threat by the victim cell’s defenses, spew out of the virus into the cytoplasm like pages off a printing press.

“It is this single-stranded RNA that instructs the cell to begin manufacturing new viruses,” Baker said. “Our research has essentially determined the position and orientation of lambda-3 ‘presses’ within the virus that print it. We thus have a much clearer understanding of the internal workings of the reovirus machine now – understanding that could play a role in determining how to stop those presses someday.”

The discovery was possible because of an innovative improvement on the microscope technology developed in Baker’s lab at Purdue. To get the complete image, graduate student Zhang obtained images of 8,000 different particles, each of which showed a viral particle from a slightly different orientation. With the help of the improved technology, he obtained the precise orientation for each particle and then superimposed them to obtain a single, three-dimensional map with all the particle’s features visible.

“From any one vantage point, only part of the virus is visible clearly,” Zhang said. “But with enough images, it was possible to assemble them into a coherent, complete picture.”

While Baker is optimistic that the technique can be applied to many different viruses, he said at this point it is limited primarily to the study of symmetric viruses.

“Reoviruses are highly regular, with little differentiation between one particle and another,” Baker said. “However, many viruses, such as HIV, are polymorphic, meaning each particle is asymmetric and differs slightly from its kin. At this point, we unfortunately cannot look at polymorphic viruses at high resolution with current technology.”

Nonetheless, the technique does permit detailed examination of other components of symmetric viruses, such as the proteins in the virus’ capsid, or outer shell.

“Zhang is now studying one of the capsid proteins in greater detail,” Baker said. “At resolution of 7 angstroms or better, it might eventually help scientists figure out how to develop an effective antiviral to stop the process.”

With modifications, the viral particles might be used to treat other diseases.

“Someday, scientists might be able to change the virus to custom manufacture RNA that sends messages we choose,” Baker said. “We could use it to fight other viral infections or potentially even cancer.”

Baker’s team is associated with several interdisciplinary centers at Purdue, including the Markey Center for Structural Biology and the Purdue Cancer Center.

Funding for this research was provided in part by a grant from the National Institutes of Health and a Keck Foundation award.