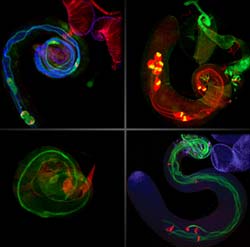 You might say that caspases are obsessed with death. The primary agents of programmed cell death, or apoptosis, caspases kill cells by destroying proteins that sustain cellular processes. Apoptosis, a highly controlled sequence of events that eliminates dangerous or unnecessary cells, contributes to a wide variety of developmental and physiological processes–in a developing embryo, apoptosis creates the space between fingers and adjusts nerve cell populations to match the number of cells they target; in an adult, apoptosis counters cell proliferation to maintain tissue size and density. Now it appears that caspases may also play a role in creating life. As Bruce Hay, Jun Huh, and colleagues of the California Institute of Technology, report in this issue, multiple caspases and caspase regulators are required for the proper formation of free-swimming sperm in the fruitfly Drosophila.

Caspases, which typically exist in a quiescent state in nearly all cells, are regulated through a complex network of activators and inhibitors. Once activated, a “caspase cascade” ultimately cleaves and irreversibly alters the function of essential cellular proteins, leading to apoptosis. Not surprisingly, cells keep caspase activation under tight wraps. That’s why it’s intriguing that multiple caspases normally associated with the induction of cell death participate in this non-apoptotic process.

During spermatogenesis, germline precursor cells–the cells that generate sex cells–give rise to 64 haploid spermatids. Spermatids are connected by intracellular “bridges” that, along with most other cytoplasmic components, must be expelled in a process called “individualization” to create terminally differentiated free-swimming sperm. A similar process–elimination of cytoplasm and membrane packaging of individual spermatids–also occurs in mammals, and its disruption is associated with male infertility.

Hay’s group studied the consequences of inhibiting caspase activity in the male germline cells of fruitflies and found that individualization depends on caspase activity. The researchers went on to characterize the pathways that activate caspases during sperm individualization and found that several different apoptosis-related caspases and caspase regulators are recruited through different pathways at distinct points in time and space to create individually packaged, free-swimming sperm, a distinctly non-apoptotic process.

Insights into the molecular basis of caspase activation in sperm individualization could provide clues to male infertility and suggest possible treatments.

All works published in PLoS Biology are open access. Everything is immediately available without cost to anyone, anywhere–to read, download, redistribute, include in databases, and otherwise use–subject only to the condition that the original authorship is properly attributed. Copyright is retained by the author. The Public Library of Science uses the Creative Commons Attribution License.