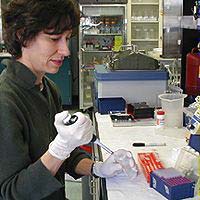 Put a caramel in your mouth and your taste buds detect the sugary substance, instantly sending a message to the brain, which interprets the signal – sweet!

Trying to figure out what happens in the split-second between eating something and recognizing its sweet or bitter flavor – between detecting a taste and a signal reaching the brain – led USC neuroscientist Emily Liman to take a closer look inside the cells in the taste buds.

Her findings reveal new details about how the sense of taste works.

And calcium, said Liman, plays a key role in the detection of tastes by taste cells in the tongue.

The research by Liman, an assistant professor of biological sciences in the USC College of Letters, Arts & Sciences, and graduate student Dan Liu will be published in the Proceedings of the National Academy of Sciences this month. The paper also offers a molecular model of how taste cells reset so they are ready to detect new tastes.

The study appeared online Dec. 1 in the journal’s early edition.

Until recently, scientists have known little about how taste works on a cellular or molecular level. Just four years ago, scientists officially added a unique taste, called umami, to the list of the better known: sweet, bitter, salty and sour.

Umami receptors are sensitive to the amino acid glutamate, which most think serves as a marker for protein-rich foods.

Glutamate also is the main ingredient in the commonly used flavor additive MSG (monosodium glutamate), which may explain the additive’s appeal.

Taste research has attracted the attention of researchers like Liman who are interested in unraveling how cellular signaling works.

“It’s important to know how taste works and to identify the molecules involved,” she said. “These molecules can be targets for designing chemicals that activate taste – for example, a better artificial sweetener – or that block taste, such as an additive that could be used to block bitter tastes.”

In the study, Liman and Liu looked closely at a protein necessary for detecting sweet, bitter and umami tastes.

Without the protein, called TRPM5, mice can’t discern between the flavors.

Once activated, the protein appears to play a key role in the taste-signaling pathway, somehow sending a message to the brain about what’s been tasted..

Liman, who has investigated similar issues relating to the sense of smell and pheromone detection, studied how this protein worked in an experimental cell system.

She found that the protein acts like a gated bridge on the cell’s membrane, connecting the inside and outside of the cell. The gate opened when the researchers added calcium ions.

In general, proteins like TRPM5 are considered good potential drug targets because their position on the cell surface makes them more accessible than proteins inside the cell.

In other experiments, Liman and Liu figured out that the protein TRPM5 closes as it undergoes desensitization to taste.

Desensitization is what allows a person to adapt to a strong taste or smell over time, perhaps barely noticing it after a while.

The researchers also found that the TRPM5 protein gate opens up again through an interaction with another cellular molecule called PIP2.

Liman cautioned that her team has yet to show conclusively that calcium is responsible for the initiation of the signal to the brain.

To prove this, she will have to see whether her laboratory studies apply to taste cells in living animals, experiments she hopes to start soon.