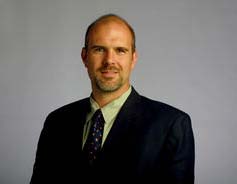 By studying how monkeys choose to look at lighted targets for juice rewards, neurobiologists have identified a still-mysterious region of the cerebral cortex as an area that judges the value of rewards, and adjusts that value as circumstances change.

The finding adds a significant piece to the puzzle of how the brain is wired to make judgments, perhaps even moral judgments, about the outside world, said the researchers. The findings may also have implications for understanding a number of neurological disorders, said the scientists. Damage to the area the researchers studied — called the posterior cingulate cortex — has been linked to cognitive decline in Alzheimer’s disease, as well as pathologies of stroke, obsessive-compulsive disorder, schizophrenia and spatial disorientation.

The researchers, led by Michael Platt, Ph.D., Duke University Medical Center assistant professor of neurobiology, published their findings in the Dec. 4, 2003, issue of the journal Neuron. Other authors on the paper were joint lead authors Allison McCoy of Duke and Justin Crowley, Ph.D., of Carnegie Mellon University; and Golnaz Haghighian and Heather Dean of Duke.

“Even though the posterior cingulate cortex is a large structure in the brain that is easily identifiable in all mammals, including humans, almost nothing was known about what it might do,” said Platt. “Anatomical studies show that it is kind of a nexus of brain circuitry involved in motivational or emotional inputs from the limbic system. And it is strongly connected to structures involved in making decisions and generating responses. So, we theorized that it seemed to be important for somehow putting together the costs and benefits associated with different options in an animal’s environment.”

The researchers chose to study the role of the posterior cingulate cortex in making decisions about eye movement, because the visual system and the neural control of the eye muscles is very well understood, said Platt. So, they devised an experimental procedure in which monkeys would be asked to shift their gaze to one of a vast array of lighted diodes, in return for a fruit juice reward. At the same time, the researchers would monitor electrical activity in the neurons of the posterior cingulate cortex.

“We were trying to find those circuits that seem to associate motivational outcomes or emotional outcomes with the actions or the stimuli that produced them,” said Platt. “So, once we had mapped the regions of the posterior cingulate cortex that responded to specific regions of visual space, we wanted to find out whether these neurons were representing how valuable movements to that region of space were.

“We manipulated how much fruit juice a monkey got for making particular eye movements, and we found a direct linear relationship between how strongly these neurons fired and the amount of fruit juice that was delivered,” said Platt.

“And what really distinguishes the response of these neurons in the posterior cingulate cortex from other brain regions that respond to rewards is that these neurons not only respond just after the monkey makes an eye movement, but after the reward as well,” he emphasized. “So, we’re arguing that the first response represents a prediction of what the monkey expects the outcome to be, and the second response reflects what the outcome really was. And these are exactly the kinds of signals you would expect if the brain region was functioning to update and learn the value of different options.”

Such a brain region would be determining what neurobiologists term a “reward-prediction” error — a comparison of a predicted with an actual reward. To demonstrate the cingulate cortex was doing just this, the researchers performed trials in which they did not give the monkey a juice reward on every trial.

“When the monkey expected a reward and didn’t get it, we found that these neurons would fire very strongly following the time when the monkey would normally expect a reward,” Platt said. “So, we believe that firing meant that the neurons were registering a large reward-prediction error, and that this error would influence both neuronal activity and looking behavior on the next trial. Sure enough, it did,” he said.

“And so, the posterior cingulate cortex seems to be — at least, for visuospatial orienting — putting together these signals of reward-prediction error with looking to the part of space that was connected with that reward,” he concluded.

According to Platt, the latest findings could yield new insight into the function of the posterior cingulate cortex in neurological disorders. Since the region is known to be affected in Alzheimer’s disease, obsessive-compulsive disorder and schizophrenia, further study could reveal underlying mechanisms for pathologies in this disease, he said.

“It has been observed that damage to this area can cause disturbances in spatial perception,” Platt said. “Such damage can sometimes cause the kind of ’neglect’ of a visual area that you see in stroke patients who don’t perceive things on one side or the other of their visual field.

Also, said Platt, although he and his colleagues used eye movement as their experimental indicator of response, the posterior cingulate cortex has been linked to control of other muscle movements, suggesting that it plays a broader role in decision-making about actions.

Further studies will aim at understanding the neural machinery of the posterior cingulate cortex in greater detail, said Platt. For example, by precisely stimulating neurons in the region at different points in the judgment process, the researchers hope to determine whether they can affect the ability of a monkey to choose the right eye movements to receive a reward.

Also, he said, the researchers will seek to expand their understanding of the brain region, to determine whether it is involved in broader moral judgments and social reasoning—a possibility suggested by recent neuroimaging studies in humans.

“We’ll have to be very clever in these experiments,” said Platt. “After all, what is moral judgment for a monkey? So, we’ll have to develop a way to measure whether a monkey perceives another violating a social norm, for example, and determine whether the posterior cingulate cortex is involved in that perception.