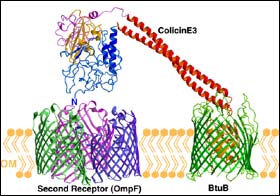 Shown in this graphic is the protein colicin and the receptors it uses to cross the cellular membrane of an E. coli bacterium. After lodging one of its ends in the "BtuB" receptor, usually used to admit vitamin B12 into the cell, the protein uses its extended "fishing pole" to search for a porous second receptor, "OmpF," that will allow its import across the membrane. (Kurisu et al., Nature Structural Biology, 2003). <br> <br>

When a cell needs a protein to function, it sometimes uses molecule-sized fishing poles to “catch” one and “cast” it across the cell membrane, reports a research team of Purdue University biologists.

Using high-resolution X-ray crystallography, a team including William A. Cramer has determined the structure and surprising behavior of a protein receptor complex, or “gate,” found in the outer membrane of an E. coli bacterium. The complex is one of thousands of such tiny gates that the cell uses to bring substances into its cytoplasm, or interior. The team also determined the structure of one such substance, a protein called colicin, that the gate admits into the E. coli, marking a first for the biological field.

“This represents the first time we have seen a receptor complex and its corresponding importable protein up close,” said Cramer, who is Henry Koffler Distinguished Professor of Biological Sciences in Purdue’s School of Science. “While we have seen the gates before as a group, we have never seen how an individual gate works to bring a protein inside. This information could tell us a lot about our own metabolism.”

The research, which appears in the November issue of Nature Structural Biology, was performed by a team including lead authors Genji Kurisu, Stanislav Zakharov and Masha Zhalnina. Also contributing was Michael Wiener of the University of Virginia’s Department of Molecular Physiology and Biological Physics.

The group’s work turned up some unusual details about cellular commerce, the business an E. coli cell conducts with the outside world through its membrane. With hundreds of protein receptors serving as gate guards, the membrane admits into the cytoplasm the nutrients the cell needs to exist. In most cases, receptors are made to admit only one particular substance.

“If you’ve ever seen the game ’Perfection,’ in which you have to put a number of uniquely shaped pegs into their corresponding holes before time runs out, you have a general idea of how these receptors are laid out in the cell membrane,” Cramer said. “There are hundreds of receptor types, each of which is built to admit one thing – iron or sugar molecules, for example.”

But while the receptor Cramer’s team analyzed was made to admit the vitamin B-12, the researchers found that colicin could enter the E. coli by “parasitizing” the receptor for its own use.

“Its method, at first, seems a bit unorthodox,” Cramer said. “Colicin essentially has two parts connected to one another by a long rod, and it cannot fit through a single hole in the membrane. So once it finds its first hole, it has to go fishing for another.”

One of the colicin’s halves binds to the vitamin B-12 receptor, while its tail end remains hanging from the membrane like a long fishing rod. The B-12 receptor then essentially swings the tail around until it finds what it needs – the second receptor that can admit the rest of the colicin.

“This two-receptor approach may appear to be a strange way to do business,” Cramer said, “but we theorize that it is actually the norm, rather than the exception, when it comes to getting proteins across membranes.”

While this is the only example thus far of how a protein uses receptors, Cramer said that evidence for the theory lies in the organization of the receptors in the membranes themselves.

“Receptors tend to lie together in clusters,” he said. “Biologists have long found a concentration of one type of receptor mixed in with a few other types, much as elephants and giraffes congregate on the plains, while other species are found in the forest. But here, it’s not terrestrial ecology at work – we think the receptors lie close together because proteins need more than one to get inside.”

Another unusual aspect of the research was the nature of the protein itself. Ordinarily, a cell will admit only beneficial substances, but colicin is actually toxic to the E. coli once it penetrates the membrane.

“Colicin fools the membrane, and can actually kill the bacterium once it’s inside,” Cramer said. “We, of course, also would like to find out how the cell ingests a helpful protein rather than a poisonous one, but this is the only protein we know that can fool the receptor complex we managed to isolate for this study.”

Membrane proteins have proven to be notoriously difficult to study (see related articles), but Cramer’s team has had a string of successful research on these molecules, which perform many functions related to metabolism in living things.

“If we can find out more about how these membrane proteins work, we may gain fundamental insights into how your body obtains energy from the environment,” Cramer said. “Strength, endurance, health – they’re all essentially metabolic processes, and figuring out how these processes change as we age will almost certainly depend on figuring out how membrane proteins do their jobs.”

Members of Cramer’s research team are affiliated with several research centers at Purdue, including the Markey Center for Structural Biology, the Bindley Bioscience Center at Discovery Park, the Interdepartmental Program in Biochemistry and Molecular Biology, and the Purdue Cancer Center.

Funding for this research was provided mainly by the National Institutes of Health.