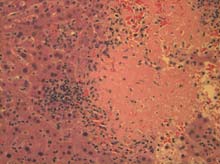 Since their discovery, cytokines have provided biomedical researchers with a tangled web of immune-system pathways to unknot. While most known cytokines have a role in stimulating immunity, one cytokine, IL-27, may actually suppress CD4 T cells, the helper T cells that orchestrate the immune system response to infections, according to researchers at the University of Pennsylvania School of Veterinary Medicine.

Their findings could provide researchers with a way to clamp down on dozens of autoimmune conditions caused by an overzealous immune system, such as Crohn disease, lupus or even sepsis. Their research is the cover article for the November issue of the journal Immunity.

“When the immune system is activated there is a cascade of cytokine interactions that regulate the growth and functions of an array of immune cells,” said Christopher Hunter, an associate professor in Penn Department of Pathobiology and senior author of the paper. “Contrary to previous studies, the IL-27 cytokine actually limits the duration and intensity of T cell activation, an ’off switch’ as it were.”

To gauge the function of IL-27, Hunter and his colleagues used mice that lack the cytokine receptor, a protein called WSX-1. Without WSX-1, IL-27 lacked a target a button to press and the researchers were able to determine how the immune system worked without this particular cytokine.

When the animal models were challenged with a toxoplasma infection, their immune systems were able to fight off the parasite but their immune response continued well after the parasites were controlled. Instead, the researchers found a surplus of activated T cells and increasing amounts of interferon gamma, a cytokine that activates antigen-presenting cells and other parts of the immune system.

These results differed from previous studies that showed IL-27 to be among the many cytokines involved in T cell differentiation and growth. Despite its similarity to other T cell-promoting cytokines, IL-27 and its receptor may be an important part of the regulation of the immune system.

According to the researchers, the identification of the role of IL-27 and its receptor has obvious clinical implications for autoimmune disorders involving T cell mediated inflammatory responses. Autoimmune diseases, while varying in severity, result as immune cells primed and activated begin destroying native cells as well as those of pathogens.

“There are many immune-mediated diseases with many different causes, but this particular pathway may represent a universal checkpoint for the immune system,” Hunter said. “It may be possible to create drugs that turn the immune system off without actually suppressing the beneficial immune reactions.”

Funding for this research was supported by grants from the National Institutes of Health.

Other Penn scientists involved in this study were Alejandro Villarino, Linda Lieberman and Emma Wilson. Linda Hibbert and Robert Kastelein of DNAX Research Institute, Tak Mak of the University of Toronto, Hiroki Yoshida of Kyushu University and Christiaan Saris of Amgen Inc. also contributed to the Immunity paper.