Stop to smell the flowers – but do it before they&#146;re pollinated 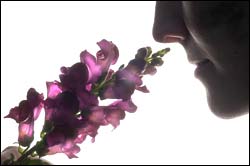 Once flowers like these snapdragons have been pollinated, the amount of scent production is reduced, according to a Purdue University study. Researcher Florence Negre, smelling snapdragons in the Purdue greenhouses, participated in the study published this month in The Plant Cell. (Purdue Agricultural Communications photo/Tom Campbell) <br>

A recent Purdue University study has uncovered the processes responsible for shutting down scent production in certain flowers once they’ve been pollinated – a finding that may help the horticulture industry enhance floral scent.

Natalia Dudareva, associate professor of horticulture, and her colleagues have recently identified the molecular mechanisms that cause petunias and snapdragons to decrease scent production after they’ve been visited by pollinators such as bees or moths. The researchers also proved that fertilization, the reproductive process that follows pollination, triggers a decline in scent production. In addition, their research has identified a new role for the plant hormone ethylene.

The study will appear in the December issue of The Plant Cell and is published online in advance of print today (Thursday, 11/20) at The Plant Cell Preview.

Over years of breeding for characteristics such as longevity, color and flower size, many commercially-produced flowers have lost their scent.

“It makes sense. To increase shelf life, a flower needs to save energy, and maybe the trade-off was that these flowers don’t expend energy on producing scent anymore,” Dudareva said.

To her surprise, she found that while petunias and snapdragons rely on some of the same compounds and processes to produce scent, these flowers regulate their post-pollination scent production in different ways at the molecular level.

In all flowers, a variety of substances known as volatile compounds contribute to floral scent, Dudareva said. A volatile compound called methylbenzoate is one of the most abundant scent compounds in many flowers, including petunias and snapdragons.

Dudareva previously showed that both petunias and snapdragons produce methylbenzoate through a process called methylation. During methylation, an enzyme adds a small molecular unit, called a methyl group, to a compound called benzoic acid, found in the petals. Two different, but related, enzymes called BAMT in snapdragons and BSMT in petunias are responsible for the methylation reaction that produces methylbenzoate and a bouquet’s bouquet.

In the current study, Dudareva and her colleagues found that in petunias the plant hormone ethylene, which is produced after pollination, suppresses activity of the gene that triggers the creation of BSMT. Without BSMT, the flower cannot produce the methylbenzoate responsible for its scent.

“In this study we found that genes that regulate scent production are sensitive to ethylene,” Dudareva said. “This was entirely unknown and was a big surprise for us.”

Ethylene plays a role in many plant development processes, including fruit maturation, leaf drop and various stress responses, but has not previously been shown to play a role in regulating scent.

Snapdragons, Dudareva found, are somewhat sensitive to ethylene, but not to the extent of petunias. While ethylene essentially shuts down scent emission in petunias after pollination, the hormone does not elicit this effect in snapdragons.

Instead, scent emission in snapdragons is regulated by a change in the ratio of two compounds produced in snapdragon flowers, Dudareva said. One of these compounds, called SAM, donates the methyl groups used in the methylbenzoate-producing reaction. The other compound, called SAH, is produced as a result of the methylation reaction. Taken together, the relative amounts of these two compounds are called the “methylation index.”

Changes in this index contribute to the decline in scent emission after pollination in snapdragons, Dudareva said.

“It’s a feedback loop, and both compounds compete to react with the BAMT enzyme,” she said.

While petunias and snapdragons rely on different mechanisms to suppress or decrease scent emission, Dudareva has shown that in both types of flowers fertilization somehow provides a signal to plants, telling them to stop producing scent.

“What we found very interesting is that fertilization, not just pollination, gives a signal to downregulate floral scent,” she said. “For two days after pollination, scent does not go down in snapdragons.”

When it lands on a flower, pollen produces a structure called a pollen tube. This tube burrows into the flower and makes fertilization possible by giving the pollen access to the flower’s ovary.

“Production of scent is an expensive process from an energy point of view, so the question was, why do flowers continue to produce floral scent if they’re already pollinated? We found that in snapdragons it takes about 48 hours for the pollen tubes to reach the ovary, and this is what shuts down floral scent,” she said.

Petunias also show a delay between pollination and decreased scent production. As is the case with snapdragons, the delay in petunias also matches the length of time it takes for pollen tubes to reach the ovaries, Dudareva said.

This tight coupling between pollination and decreased scent emission makes sense from an evolutionary point of view, she said.

Dudareva suggests that differences in the floral architecture of petunias and snapdragons may account for the different mechanisms these plants use to shut down scent production, but she has not yet investigated this topic experimentally.

“The differences could have to do with floral arrangement on the different types of plants, but it’s just a hypothesis,” she said.

Collaborating on the study were Florence Negre, Christine Kish and Jennifer Boatright of Purdue University; Beverly Underwood, Kenichi Shibuya and David G. Clark of the University of Florida; and Conrad Wagner of Vanderbilt University.