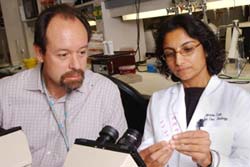 Researchers at UT Southwestern Medical Center at Dallas have shown that insulin family signaling is important for male sex determination, a discovery that furthers the understanding of testes formation and eventually could lead to treatments for reproductive disorders.

Their findings appear in the current issue of Nature and are available online.

“We are excited by this research for two reasons,” said Dr. Luis Parada, senior author of the Nature study and director of the Center for Developmental Biology. “First, the intracellular signaling pathways that mediate male sexual differentiation have remained elusive despite the fact that the controlling gene that unleashes the process was identified almost 15 years ago. Second, our experience with studying receptors and signaling in development provides us with the skills and tools to tackle this problem, which has tremendous implications in newborn disorders.”

UT Southwestern researchers now want to determine if the insulin-signaling pathway is active in human gonad formation. It has been found only in mice, but there is a strong likelihood it exists in humans.

“If the insulin-signaling pathway turns out to be important in humans, we’ll be able to activate the pathway because we know what proteins to manipulate,” said Dr. Sunita Verma-Kurvari, postdoctoral researcher in the Center for Developmental Biology and co-first author of the study. “We someday may even be able to correct reproductive disorders by activating them with therapeutics.”

In mice, the male sex-determining process begins in a region of the Y chromosome called Sry, Dr. Verma-Kurvari said. Sry triggers differentiation of the Sertoli cells, which act as organizing centers and direct formation of the testes.

Without Sry, XX or XY gonads failed to develop testes (male reproductive organs producing sperm and male sex hormones), and male to female sex reversal ensued in the mice studied. If insulin family signaling is altered, Dr. Verma-Kurvari said, Sry is changed and the downstream signaling pathway is inactive. This shows that besides playing a role in glucose metabolism and growth, insulin family signaling is critical for male sex determination, she said.

Along with the insulin family signaling pathway, Dr. Parada, who directs the Kent Waldrep Center for Basic Research on Nerve Growth and Regeneration, and his colleagues are studying the hormone Insl3, a component of the insulin-like genes. They already have found that mutations in mice cause cryptorchidism – impaired testicular descent – a congenital abnormality affecting 2 percent to 3 percent of full-term human males at birth.

Sex determination switches are diverse and can vary based on the presence of a Y or an X chromosome, environmental factors and social factors. Also, the structure of testes is quite similar among different species and suggests the presence of common players in their formation, said Dr. Verma-Kurvari.

“Little is known about the proteins and the exact pathway required for the formation of testis in different species,” she said. “Sry, for example, does not exist outside of mammals. There are testis-specific proteins that are common between species, but the timing of their expression suggests that they perform slightly different functions in different species. Since insulin family members are present in both vertebrates and invertebrates, this pathway becomes potentially interesting for playing a role in testis formation in other species as well.”

The research was supported by an Excellence in Education Endowment.