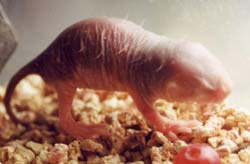 East African naked mole-rats, the only known cold-blooded mammal, have shown a rather heated response in lab tests that may have important implications for treating chronic pain in humans.

The blind, furless creatures that live underground in colonies lack a body chemical called Substance P, a neurotransmitter normally in the skin that sends pain signals to the central nervous system. The rats feel no immediate pain when cut, scraped or subjected to heat stimuli. They only feel some aches. But when the rats get a shot of Substance P, pain signaling resumes working as in other mammals.

“It was a complete surprise when we discovered that the skin of naked mole-rats is missing one of the most basic chemicals that’s found in the skin of all other mammals,” said Thomas Park, associate professor of biological sciences at the University of Illinois at Chicago and the principal investigator in the research project.

The findings were reported in a presentation by Lu Nov.8 in New Orleans at the annual meeting of the Society for Neuroscience.

Some medical researchers believe an excess of Substance P causes the human condition fibromyalgia, where patients suffer from chronic pain in soft fibrous body tissue such as muscles, ligaments and tendons. Theoretically, reducing or eliminating Substance P in affected areas could ease the pain. Experiments using naked mole-rats may help test this hypothesis and perhaps lead to new therapies.

“After we discovered that naked mole-rats naturally lacked Substance P, we realized that we had a unique situation whereby we could try to re-introduce this chemical to better understand its role in pain signaling,” said Park.

A virus was applied to the feet of the rats to transport DNA that codes for Substance P through nerve endings on the skin. The virus then migrated over a period of a few days to nerve cells near the spinal cord where the DNA produced Substance P.

A key unanswered question is why naked mole-rats evolved over perhaps millions of years to have no Substance P in their skin and became oblivious to normal pain stimuli.

One possible explanation is that because these curious creatures have had to cope with high levels of carbon dioxide in their crowded underground tunnel colonies — a condition that normally would cause the type of pain associated with Substance P in mucous membranes throughout the animals’ bodies — they have become insensitive to the pain.

Another possibility involves Substance P and blood vessel dilation in the skin — to cool the body surface. In cold-blooded naked mole-rats, however, dilation would cause them to dangerously overheat, so they may have evolved to eliminate Substance P from their skin.

“We were surprised by how dramatic the results were,” said Park. “We expected Substance P could restore some sensitivity to painful stimuli, but it was a real surprise that this single chemical could make the naked mole-rats behave just like other mammals.”

Further experiments are planned with the rats to investigate how other pain systems work in the absence of Substance P.

Funding for the research was provided by grants from the National Institutes of Health.