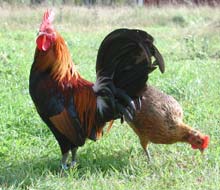 In the animal world, it’s common for females to mate with several males during one and the same reproductive period. This leads to sperm competition, that is, sperm from several different males compete to fertilize the egg at the same time.

The most common response to increased sperm competition is for males to increase the number of sperm cells to inseminate a female with. Since males’ sperm reserves are not unlimited, males should be economical in using their sperm resources. Therefore, a male should take three factors into consideration in mating: a) the female’s degree of promiscuity, that is, how many males he is competing with, b) the amount of sperm he has already invested in the female, and c) the reproductive value of the female. It is unknown how males adapt their sperm investments in relation to this set of factors.

A research team from Sweden and England have chosen to study this in chickens (Gallus gallus) at Tovetorp Zoological Research Station, Department of Zoology, Stockholm University. Chickens are highly suited to such a study since they are promiscuous, and the social status of roosters influences their access to mates.

Their study shows for the first time that roosters demonstrate a unique flexibility when it comes to allocating their sperm resources. First, roosters evince a status-dependent sperm investment that takes into consideration the female’s degree of promiscuity; second, roosters reduce the number of inseminated sperm cells in repeated mating with the same female, but increase it again when they gain access to a new female (the so-called Coolidge effect); and third, roosters prefer to mate with females of higher reproductive value. The results indicate that female promiscuity is a decisive factor in understanding the evolution of sophisticated male sexual behaviors.