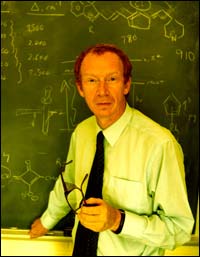 Alistair Lees spends much of his research time hoping to see the light.

Using tools that improve by several orders of magnitude on the accuracy of microscopes and stopwatches, Lees is working at the molecular level to explore the effect of light on chemical systems. The field is called photochemistry and Lees’ efforts could help to find less-expensive ways to produce gasoline, make the environment cleaner and safer, and enhance the quality of microcircuitry and the equipment that relies on it.

While most chemists work with molecules in their ground or normal states, Lees has spent the past two decades working with “excited” molecules, a state attained when molecules absorb light, known as second chemistry.

The reactions that occur during these excited states are incredibly fast – typically about one tenth of one quadrillionth of a second. To be studied, they must be slowed or in some other way inhibited and Lees has developed a unique approach.

Excited state molecules generally emit light, give off heat or break into fragments as they return to the ground state. Relying on this, many chemists – like forensic experts who determine the nature of an explosion by studying resulting debris – use a technique called matrix isolation to study the fragments produced immediately after a molecule emits light.

Lees has instead synthesized entire new molecules, which do not fragment in their excited states. When cooled, his creations remain intact and display luminescence, giving him an unprecedented chance to study the second chemistry involved – an approach, which has opened the door to the development of several promising applications.

Working with $1.2 million in grants from the U.S. Department of Energy and the American Chemical Society, Lees is studying hydrocarbon activation, particularly how some new rhodium and iridium chemical compounds act as catalysts to break apart the bonds of methane.

The reaction suggests the possibility that the small methane molecule could be built up to the size of the larger oil molecule. Methane, or natural gas, usually does not react with other compounds, but because it is both abundant and recyclable, it is an attractive alternative to oil.

Lees’ preliminary research indicates it might someday be able to replace oil in the production of many fuels, as well as a host of other products, including plastics and pharmaceuticals.

Lees’ research is also likely to help manufacturers of a wide range of products. Supported by a grant from IBM, Lees is incorporating some of his light-emitting molecules into adhesive polymers. As the adhesive sets, its luminescence changes from red to orange to yellow, signaling appropriate curing and an optimal bond.

The microelectronics industry is interested in this research. If adhesives aren’t completely set during the assembly process, machines fail, parts break and production costs soar. The aerospace and automobile industries are also interested, Lees said. “Clearly, it’s important, when you’re riding in a car or a plane that it not fall apart,” he said Photoinitiators is another application of Lees’ work. “We found that some of our organometallic compounds actually initiate polymerizations reactions when exposed to light,” he said. Lees is collaborating with General Electric and IBM to research how this technique could be used to enhance microcircuitry production.

Another application of Lees’ work is likely to stem from the arena known as supramolecular chemistry. Lees is finding ways to insert luminescent compounds into the cavities of some large molecules. Because the luminescence of such molecules changes substantially in reaction to their environment, they make excellent sensors.

Recently, Lees and his team found a compound that is a good sensor for cyanide. Others, he said, are sensitive to hydrocarbon vapors, which may help detect pollutants, another important application in today’s industrial world.