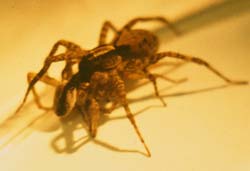 Sometimes familiarity does not breed contempt: A Cornell University behavioral scientist has found that female wolf spiders prefer mates that are comfortably familiar.

However, the researcher has discovered, a male wolf spider unlucky enough to attempt to mate with an unfamiliar female probably is doomed to be killed and eaten by the female.

“Finding this behavior is really surprising. Social experience influences mate choice,” says Eileen Hebets, a Cornell postdoctoral researcher in the Department of Neurobiology and Behavior, whose findings will be published in the online edition of Proceedings of the National Academy of Sciences (PNAS early edition, Oct. 27-31, 2003).

“This shows that invertebrates have social recognition, and it can be maintained and remembered even through the molting process. These influences affect adult behavior and possibly the evolution of traits.”

Many male wolf spiders have different looks, or phenotypes. They might have ornamental tufts of hair on their forelegs, or their exoskeletons might be of different colors. “Males of most other spider species look alike. I studied this species because there is variability among the males,” says Hebets.

Previously, researchers had explored spider behavior with young males and females collected in the field, kept in isolation and then brought together in a laboratory. In the wild, male wolf spiders mature earlier than females and often intermingle. Thus, the pre-adult females often are exposed to sexually mature males. Hebets notes that pre-adult female spiders cannot mate until their sexual organs have matured, which does not happen until their final molt. In her research, 81 immature females were exposed to mature males of specific phenotypes. About 73 percent of the immature females were exposed to more than one male phenotype and no female was exposed to more than nine different males.

Once the females entered adulthood, the highest proportion of mating occurred with familiar males. “These results clearly demonstrate that a female wolf spider’s experience during her penultimate life stage can affect her mate choice as an adult,” she says. “The socially influenced origin of female mating preference could impose incredibly strong selection pressures on male maturation times, male mating strategies and, ultimately, secondary sexual ornamentation, since exposed females are choosing mates versus meals.”

The research, “Subadult experience influences adult mate choice in an arthropod: Exposed female wolf spiders prefer males of familiar pheontypes,” was funded through a training-fellowship grant from the National Institutes of Health.