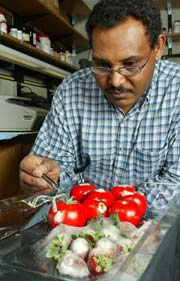 Purdue researcher Tesfaye Mengiste has identified the gene responsible for causing a fuzzy, gray mold that attacks fruits, such as strawberries and tomatoes. Mengiste, an assistant professor in the botany and plant pathology department, says gray mold disease destroys about 25 percent of the tomato and strawberry crop during some seasons. (Purdue University photo by Tom Campbell) <br> <br>

An insidious fuzzy gray mold that often coats refrigerated strawberries and many other plants during growing and storage may be prevented by a gene identified by a Purdue University researcher.

The mold is caused by a fungus, Botrytis cinerea, that often enters plant tissue through wounded or dead areas such as wilted petals, bruised fruit or at the site of pruning. In the November issue of the journal The Plant Cell, Purdue plant molecular biologist Tesfaye Mengiste and his colleagues at Syngenta Biotechnology Inc. report that the gene, called BOS1, is the first protein identified that regulates plant response to both biological and non-biological stresses.

“Botrytis affects many important crops in the field, in the greenhouse and in post-harvest situations,” said Mengiste, an assistant professor in the Department of Botany and Plant Pathology. “It attacks flowers, fruits, vegetables, bulbs, leaves and stems. It has a tremendous capacity to inflict disease and eventually cause loss of quality and yield.”

The scientists found the gene by sorting through mutations of the common laboratory research plant Arabidopsis. By studying altered plants that were highly susceptible to Botrytis, the researchers pinpointed the resistance gene, BOS1.

Once Mengiste and his team found the gene, they were able to show that it does more than restrict the growth of the pathogen. BOS1also protects the plant from stresses, such as drought and soil salinity. These stresses are called abiotic stresses. Pathogens and pests create biotic stresses.

Gray mold disease destroys about 10 percent of the grape crop annually and about 25 percent to 30 percent of tomato and strawberry crops in some seasons, experts report. It also infects many varieties of flowers including petunias, geraniums and chrysanthemums.

“The major control for most of these pathogens now is application of fungicides,” Mengiste said.” But there are environmental pollution and health concerns connected with their use. Also, Botrytis builds up genetic resistance to fungicides that are used frequently.

“The most cost-effective and environmentally sound approach to preventing this disease is through genetic resistance. If we can use the same gene we found in Arabidopsis in other plants that are hosts of Botrytis, then BOS1 can be utilized to prevent this fungus and other similar plant diseases.”

Cool, humid weather fosters the fungus. That’s why the mold often appears on strawberries and raspberries stored in your refrigerator’s fruit and vegetable drawer.

Because spores spread Botrytis, one infected piece of fruit or plant will infect nearby plants. The fungus can start in healthy plant tissue but most often begins in dead leaves or petals that have fallen to the ground. Botrytis can live through the winter in a dormant state and then attack new growth in the spring.

Because of the pathogen’s ability to spread easily and kill a whole plant, researchers tested single mutant Arabidopsis leaves to learn the susceptibility. The scientists inoculated a single leaf with a mixture containing Botrytis spores and then removed the leaves from the plant so individual plants would survive for further testing. This allowed them to determine which gene halted the fungus’ invasion.

“We want to understand how plants resist Botrytis, what biological events occur when plants perceive that this fungus or other necrotrophic pathogens are present,” Mengiste said.

Botrytis is a necrotrophic pathogen, meaning it obtains nutrients from dead cells. That is why the fungus kills the plant cell or invades through injured or dead parts of plants. Once it enters dead areas, it begins killing other parts of the plant, resulting in plant decay.

“If we can identify these genes, then they can be used to expedite plant breeding for resistance to Botrytis and other similar diseases,” Mengiste said.

In learning how to prevent necrotrophic pathogens, the researchers face a problem because biotropic pathogens also attack plants. These are pathogens that feed on live cells. Some plants actually kill their own cells at the site where a biotrophic pathogen is trying to invade in an effort to combat the threat.

But he said he believes understanding the molecular workings of plants’ natural methods of fighting off disease is the best way to overcome pathogens.

The BOS1gene appears to control other genes and seems to provide resistance to several types of stresses. In other words, it controls a number of different genes or proteins in a molecular pathway that determines whether a plant overcomes adversity.

“In terms of biotechnology and improvements of both agricultural and horticultural plants through molecular approaches, it’s important that this gene is a regulatory protein because it means you can just alter it so there is more or less of it. An alteration of the gene then can control multiple genes further down the pathway,” he said.

“This way we could increase yield and quality of some plants depending on the conditions and/or diseases that may affect them.”