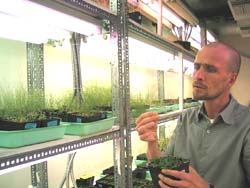 A team of University of California scientists has identified a gene that controls the production by terrestrial plants of methyl halides, gaseous compounds that contribute to the destruction of ozone in the stratosphere.

The discovery of the gene, detailed in the October 14 issue of the journal Current Biology, is important because it now provides scientists with a genetic tool with which to probe how and why plants produce methyl halides. The identification of the gene should also help researchers determine the extent to which plants emit methyl halides into the atmosphere and why certain plants increase their methyl halide emissions in high salt environments.

The team of plant geneticists at UC San Diego and atmospheric chemists at UC Irvine dubbed the gene HOL for “Harmless to Ozone Layer” because disruption of the gene largely eliminates methyl halide production. The researchers discovered the gene in Arabidopsis, a mustard plant in the cabbage family that is used commonly in genetic studies.

The researchers also found closely related variants, or homologues, of the HOL gene in the genetic databases of rice, cotton, corn and barley. Homologues had been identified separately in cabbage and a salt marsh plant by geneticists at the University of Montreal and the University of Illinois, Urbana-Champaign, respectively. These discoveries, taken together, indicate that the gene is likely a common trait of all terrestrial plants. However, the scientists emphasize that the ubiquity of the HOL gene in plants and their results cannot be used to suggest that plants are responsible for the depletion of the earth’s ozone layer.

“Stratospheric ozone depletion is a human-created problem,” says Robert C. Rhew, an assistant professor of geography at UC Berkeley who noted that most of the bromine and chlorine that reach the stratosphere are produced by humans. “Methyl halides are tricky compounds to study because they emanate from both natural and human sources, and our study addresses the current pressing question of how and why these methyl halides are produced.” Rhew conducted the study while a postdoctoral researcher in the laboratory of Eric S. Saltzman, a professor of earth system science at UC Irvine who is also a co-author.

“The take-home message of this study is that all plants probably have this gene,” says Lars Østergaard, a postdoctoral researcher in the laboratory of Martin Yanofsky, a UCSD biology professor and a co-author. “Now we can determine more precisely the impact plants have on the production of methyl halides and whether it might be appropriate or feasible to engineer crops to minimize the expression of this gene.”

Østergaard and Yanofsky began their collaboration with the UC Irvine chemists several years ago, when Rhew, a former graduate student at UCSD’s Scripps Institution of Oceanography working on identifying natural sources of methyl halides, wondered if a plant gene could be found that controlled methyl halide production.

Human-produced compounds that release chlorine and bromine into the atmosphere—such as chlorofluorocarbons (CFCs), halons and industrially produced methyl bromide—have long been identified as stratospheric ozone depleting compounds and are gradually being phased out under the 1987 Montreal Protocol in an effort to reduce the halogen load in the atmosphere.

But a number of studies in recent years have found that some crops also contribute to the atmosphere a small fraction of ozone-reacting methyl halides, such as methyl chloride, methyl iodide and methyl bromide—a compound that is manufactured to be used in agriculture as a soil fumigant, but which will be phased out completely by the Montreal Protocol by 2005.

One such study published in Science three years ago by a UC Irvine team estimated, from measurements of a rice paddy over a period of two years, that rice farming around the world contributes 1 percent of the total methyl bromide and 5 percent of the methyl iodide emissions.

“The major industrial sources of these halides increasingly are being regulated, but we still must uncover their natural sources,” says UCI Chancellor Ralph J. Cicerone, a leading expert on ozone depletion who headed the Science study. “We only know where half of the methyl chloride and two-thirds of the methyl bromide are coming from. The identification of the HOL gene is a critical step forward in allowing us to determine more precisely the contribution of plants to these unknown, natural sources of methyl halides.”

Another study, published by Rhew while a graduate student at Scripps, estimated that 10 percent of the natural global emissions of methyl chloride and methyl bromide could be coming from salt marshes, which make up less than a tenth of one percent of the global terrestrial surface area. Other studies have identified biomass burning, leaded gasoline combustion, fungi and the oceans as primary sources of methyl halides.

Scientists have discovered that as the concentration of salts, or halides, increase in the soil or water, plants tend to release more of those methyl halides into the atmosphere. This suggests that the current push to generate new varieties of salt-tolerant crops to increase food production may have the unintended effect of increasing methyl halide emissions.

The UC scientists say the enzyme produced by the HOL gene may function to metabolize plant compounds that are thought to serve as insect repellents, suggesting that plants may have initially evolved the biochemical pathway that produces methyl halide emissions to ward off insects. This may provide an additional challenge to scientists seeking to genetically engineer salt tolerant crops that can minimize methyl halide production without losing their natural insect resistance.

“By studying plants with normal and mutant copies of this gene,” says Yanofsky of UCSD, “we should be able to address the question of whether the gene is important for pathogen resistance.”

The study was supported by grants from the National Science Foundation and NOAA’s Postdoctoral Program in Climate and Global Change.