Home / Life Sciences and Chemistry / For quantum confinement, size matters, but so does shape
14.10.2003

For quantum confinement, size matters, but so does shape 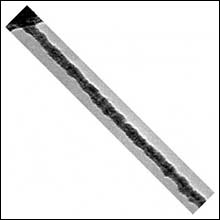 Washington University chemists have shown that the shape of nanowires such as this one can affect its electronic and optical properties. <br>Courtesy photo

Size matters, but so does shape, at least in the world of semiconducting nanocrystals, report chemists at Washington University in St. Louis.

Their findings, published in the August 2003 issue of Nature Materials, demonstrate experimentally that the shape of a semiconductor nanocrystal can affect its electronic and optical properties. The study, led by graduate student Heng Yu and William E. Buhro, Ph. D., professor of chemistry in Arts & Science, is the first comprehensive comparison relating shape to the phenomenon known as “quantum confinement.”

Quantum confinement describes how the electronic properties – the organization of energy levels into which electrons can climb or fall – and optical properties change when the material sampled is in sufficiently small amounts – typically 10 nanometers or less. Specifically, the phenomenon results from electrons and holes being squeezed into a dimension that approaches a critical quantum measurement, called the exciton Bohr radius. Holes are the positively-charge species left over when an electron vacates its position in a crystal.

Since the late 1960s, scientists have theorized that shape, as well as size, would influence the character and magnitude of quantum confinement. However, according to Buhro, experimental examples of systems that differed only in the geometric dimensionality of confinement were not available prior to his current study.

Scientists previously have developed terms to describe nanocrystals according to their shapes. A quantum well is a thin film of macroscopic width and length — large enough to be visible to the naked eye – but only a few nanometers in thickness. Thus, it is said to be confined in one dimension. Quantum wires, which are confined in two dimensions, can be thought of as nanometer-sized cylinders that can measure up to several microns in length. Finally, the quantum dot is a unidirectional nanometer-sized sphere, confined in all three dimensions.

The Nature Materials paper reports two significant findings. First, the group devised a novel synthesis that created indium phosphide nanowires small enough to be considered quantum wires. Second, they quantified the band gap — that is, the amount of energy that an electron must acquire in order to conduct electricity in a semiconductor — for their quantum wires and compared them to others’ published band gaps for indium phosphide quantum dots. What they found revealed exactly how the change from cylindrical wire to spherical dot influenced the energy gap.

“By developing a synthesis of narrowly dispersed quantum wires with diameters within the strong confinement regime, we have been able to provide the first experimental confirmation of the theoretical predictions regarding two-dimensional vs. three-dimensional confinement,” said Buhro. “Furthermore, we have provided a simple criterion that experimentalists can use to determine if semiconductor nanowires are behaving as true quantum wires.”

Buhro and his research group began synthesizing semiconducting materials in the mid-1990s using a catalytic growth mechanism that they discovered. Solution-Liquid-Solid growth (SLS) enables semiconductors to be grown at low temperature, in solution and in a flask—ideal from a chemist’s perspective. But despite these advantages, Mother Nature, not the researchers, controlled the size of the nanomaterials.

In 1999 Yu and Buhro set out to add an element of size-control to SLS growth. A couple years later, they literally struck gold — gold seeds, that is. Yu’s experiments demonstrated that gold nanoparticles could seed the growth of other low melting point metal nanoparticles, which in turn could catalyze nanowire growth. This discovery led to a generalized growth strategy for numerous size-controlled nanomaterials that both they and other researchers now synthesize and study.

The Nature Materials paper focused on “the synthesis of diameter-controlled indium phosphide nanowires having sizes within the strong-confinement regime of about 3 to 11 nanometers,” Yu explained. “This allows us to systematically study the dependence of quantum confinement on the diameters of the wires. And because the wires are so long — micrometers in length — they could be considered as perfect one-dimensional structures and two-dimensional confinement systems around their diameters.”

Yu and Buhro found that, in addition to being able to dictate the nanowires’ diameters, they could also control monodispersity — the deviation between each nanowire’s diameter and that of neighboring nanowires grown in the same solution. This ability was critical because a change in the nanowire’s diameter will alter its physical properties including light emission, an important application for semiconductors.

The chemists focused on nanowires made of the semiconductor indium phosphide for several reasons, but chiefly because it absorbs and emits light in a convenient region of the electromagnetic spectrum.

“Another reason we were interested in indium phosphide is that quantum dots of very high quality have been reported [by others] and extensively studied,” Yu noted. “So it was easy for us to compare our wires, 2-D confined, with their dots, 3-D confined, to see how the shape matters in nanostructures.

Because the study was the first of its kind to probe the differences between 2-D and 3-D quantum confinement, the chemists corroborated their experimental results with theoretical calculations performed by researchers at Lawrence Berkeley National Labs. The theoreticians used sophisticated computer models to calculate, atom by atom, the expected band gap of model nanowires and nanodots, which compared closely to the experimental values.

After compiling all of the data graphically, the group found that the famous “particle-in-a-box” calculation — a quantum model both simple enough for college freshmen and rigorous enough to explain observed quantum phenomena – fell short of predicting absolute values for individual shapes , due to its simplification of the nature of diameter dependence.

However, they were encouraged to discover that particle-in-a-box approximated the ratio of the slopes of wires to dots, a fact verified by their experimental and theoretical data. This is a particularly advantageous finding because it gives other researchers a method of assessing 2-D confinement in their own quantum wires without the need of a supercomputer.

“The semiconductor quantum-wire field is very young, because synthetic limitations are only now being surmounted,” Buhro said. “Experimentalists working in the quantum dot field were largely unaware of how the band-gaps in corresponding families of quantum dots and quantum wires should compare. We have now provided the criteria by which quantum confinement in semiconductor wires should be judged.

“I hope that workers in the field will use our criteria to prove that newly synthesized examples exhibit true 2-D confinement.”