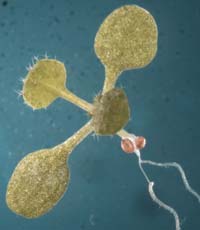 Images of normal plant (above) and plant exposed to chemical that inactivates the newly discovered gene SIR1 (below) <br>Credit: Yunde Zhao, UCSD

By taking a fresh approach to an old problem, University of California, San Diego biologists and colleagues at other institutions have found a new gene essential for plant growth, a discovery that could lead to the design of better herbicides and even novelty plants.

Despite 100 years of research on auxin, a plant hormone essential in regulating plants’ development and responses to their surroundings, including the ability of plants to grow toward light, much remains unknown about how auxin is synthesized and how it works. A new approach known as “chemical genetics,” in which chemicals are used to regulate activities of proteins produced by specific genes, has revealed a previously unknown gene, SIR1, which functions to keep the effects of auxin in check. The UCSD scientists say that one implication of their discovery is the potential development of environmentally safe herbicides from chemicals that impede the action of auxin by over-activating the SIR1 gene.

A paper featured on the cover of the October 10, 2003 issue of Plant Physiology details the chemical genetic approach. The discovery of the SIR1 gene was reported in the August 22nd issue of Science.

“By using chemical genetics we have been able to identify a new gene that regulates the important plant hormone auxin,” explains Yunde Zhao, assistant professor of biology at UCSD, who was largely responsible for the work. “This finding can be applied to manipulating plant growth, including the development of a new generation of herbicides. Chemical genetics shows a great deal of promise for helping us understand aspects of plant biology, like how auxin is synthesized and controlled, where genetic methods used by researchers until now only had limited success.”

Interestingly, the researchers found that if, at different times, they applied and withdrew the chemical that inactivated the SIR1 protein, this led to strangely shaped plants because SIR1 usually dampens the effect of auxin. Auxin plays important roles in the development of roots, stems and leaves, but either too much or too little auxin interferes with development. Zhao thinks this could have implications for the design of novel flowers and other plant structures.

“Some had leaves that developed into striking trumpet-like shapes,” he says.

Chemical genetics has two major advantages over the genetic approaches traditionally used. First, chemical genetics can permit a researcher to study the effects of more subtle gene changes than eliminating a gene. This is important because a gene may play more than one role, at multiple times during development. If the gene has an essential role early in development, then eliminating it will kill the organism, preventing researchers from discovering other roles for that gene later in development. Since chemical genetics is reversible, by simply stopping the application of a chemical that inactivates or activates a protein produced by a gene, it can be used to study what a gene does at different stages in development.

A second advantage of chemical genetics has to do with the fact that the molecules used can often inactivate related proteins with the same function. A problem with the traditional approach of eliminating a particular gene to determine its function is that if there are two or more genes with the same or similar functions, removing one of those genes may have no apparent effect on the health of the organism. This gene redundancy is more common in plants than in animals.

“About 70% of the genes in the model plant we used in our study, Arabidopsis, may have at least two copies,” Zhao points out. “This is a problem with traditional genetic approaches, but with chemical genetics a small molecule will most likely be able to inactivate all members of a closely related family of proteins provided that they operate by a similar mechanism.”

Both gene redundancy and the lethal effect of eliminating genes essential for plant development have plagued biologists studying auxin for many years. Because chemical genetics can be useful in solving these two problems, Zhao thinks that the application of chemical genetics will likely lead to rapid advances in the field.

While the technique of chemical genetics had been used by researchers working on yeast, bacteria and mammalian cells in culture, its application in plant biology is still at an infancy stage. Zhao cites his background as a biochemist as helping him to come with a fresh perspective to the auxin problem.

“When I started working on plants, I didn’t have much knowledge in plant biology,” Zhao says. “So I wasn’t afraid of taking on those projects the plant biologists didn’t think would work.”

The SIR1 work was initiated by Zhao in the laboratory of Joanne Chory, a Howard Hughes Medical Institute investigator at the Salk Institute for Biological Studies, and continued in Zhao’s own lab at UCSD in collaboration with Xinhua Dai, research associate in biology at UCSD; Helen Blackwell, now assistant professor of chemistry at University of Wisconsin, Madison; and Stuart Schreiber, professor of chemistry at Harvard University and an HHMI investigator. The work was supported by the National Institutes of Health and the Howard Hughes Medical Institute. The Plant Physiology paper on chemical genetic approaches to plant biology was written in collaboration with Helen Blackwell, with support from the NIH.