Findings in frog oocytes may help study of chromosome physiology 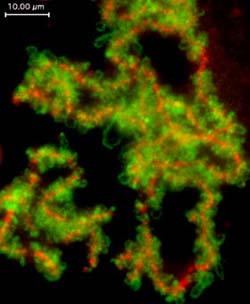 After immunofluorescent staining with two antibodies, the protein XCAP-D2 is evident in red on the lampbrush chromosomes (green) in the nucleus of a frog oocyte. The red signal is associated with highly condensed but transcriptionally inactive regions, while the green indicates long loops of intense transcription. <br>Photo courtesy of Michel Bellini <br>

Researchers studying the nuclei of frog oocytes in early stages of meiosis — the cell division that gives rise to germ cells — have found that two key proteins remain apart at a crucial time before condensation occurs. One of the proteins, they say, may be important in the early organization of chromosomes and later may recruit the other.

In the August issue of the journal Chromosome Research, scientists at the University of Illinois at Urbana-Champaign detail how they used antibodies to the proteins, XCAP-E and XCAP-D2, and confocal laser scanning microscopy to zero in on the proteins’ precise locations inside the nuclei of gametes of the African frog Xenopus laevis.

(The research will be on display as a poster presentation Aug. 17-22 during the Gorden Research Conference on Plasmid & Chromosome Dynamics in Tilton, N.J.)

The proteins are from two subcomplexes of chromosome condensation proteins known as condensins. One group of the Xenopus Chromosome Associated Proteins (XCAP), including XCAP-D2, consists of regulatory proteins, while XCAP-E is among those directly involved in condensation.

“On the chromosomes, XCAP-D2 was only found associated with the chromomeres,” said Michel Bellini, a professor of cell and structural biology at Illinois. That location features highly compacted chromatin, or fibers of DNA, suggesting XCAP-D2 is directly involved early in meiotic chromatin organization.

Immunofluorescent staining showed XCAP-D2 proteins on the 18 easily recognizable chromosomes of the frog oocyte. These extended chromosomes stretch out long loops of chromatin — regions of extensive RNA synthesis — causing them to resemble a lampbrush, and, more importantly, allowing for detailed cytological studies of the major components implicated in both RNA transcription and chromatin organization.

“When we looked for XCAP-E, we did not see it on the chromosomes,” Bellini said. “Instead, it was accumulated in the nucleoli, small organelles containing ribosomal DNA.”

“This discovery came as a big surprise for us,” he said. “When you deal with chromosomal proteins, you expect them to be found on the chromosomes.” Because the two proteins were segregated, he added, there was no overlapping of signals.

The proteins have equivalents in other organisms, so the findings may help other studies of chromosome physiology, especially the functional aspects of these proteins, Bellini said. At the critical time of cell division, chromosome packaging is vital. Genetic errors can result in deformities, diseases such as cancer and/or the death of the organism.

Frog oocytes are large, allowing researchers to easily manipulate genetic material. A nucleus, for example, is 400 microns in diameter. A human red blood cell is 8-10 microns.

Bellini’s doctoral student Brent Beenders did much of the research, which was funded by the National Institutes of Health and the Cancer Research Association of France.

“What we propose is that in the oocytes XCAP-E may not be required in the very early stages of meiosis,” Bellini said. “XCAP-E is there. The fact that it is in the nucleolus may be simply to prevent its association with XCAP-D2 at this stage. Perhaps at this stage condensation is not wanted but active transcription is necessary. This might be one way to prevent condensation. The nucleolus is acting as a trap for this nuclear protein’s action. It may be that XCAP-D2 calls in XCAP-E when condensation is needed.”

Bellini’s team also found both proteins in the Cajal bodies — small independently floating organelles — that are theorized to be important in the assembly and modification of the RNA transcription and processing machinery. “This finding suggests the exciting possibility that Cajal bodies might also be implicated in the assembly of chromatin remodeling complexes,” Bellini said.

Understanding how condensation proteins operate at the cellular level will help scientists work to understand their molecular role in chromatin condensation, he added.

Other contributors to the study were Erwan Watrin and Vincent Leganeux, both of the National Center for Scientific Research in France, and Igor Kireev of the department of cell and structural biology at Illinois and Moscow State University in Russia.