Why we’re all lefties deep down 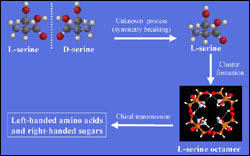 This schematic illustrates Cooks theory of how serine, one of the 20 amino acids that comprise all living things, may have determined the chirality of other biological molecules at the dawn of evolution. "Left-handed" serine, shown here as L-serine, has virtually the same properties as "right-handed" D-serine. But because of an unknown process that possibly caused L-serine to become more prevalent than D-serine in the environment, the strong clusters that L-serine forms bonded only with other left-handed amino acids and right-handed sugars. Other biological molecules with an incompatible chirality were left out of the bonding process, and all the organisms on the planet eventually developed from amino acids with exclusively left-handed chirality. <br> <br>For higher resolution graphic <a target=_blank href=http://www.innovations-report.de/bilder_neu/cooks2.jpg>klick here</a>

It may be a right-handed world, but recent Purdue University research indicates that the first building blocks of life were lefties – and suggests why, on a molecular level, all living things remain southpaws to this day.

In findings that may shed light on the earliest days of evolutionary history, R. Graham Cooks and a team of Purdue chemists have reported experiments that suggest why all 20 of the amino acids that comprise living things exhibit “left-handed chirality,” which refers to the direction these basic biological molecules twist–and how a single amino acid might be the reason.

Amino acids can be oriented either to the left or the right and possess the same chemical properties regardless of their chirality. But somewhere along the line, living things evolved using only amino acids of the left-handed variety. Scientists have puzzled over the reason for many years, but Cooks’ group seems to have found the answer: A single amino acid called serine set the standard eons ago, forcing all other biological molecules to follow suit.

“We believe that serine was the first biological molecule to make a chiral choice, possibly one of the root steps in chemical evolution itself,” said Cooks, Henry Bohn Hass Distinguished Professor of Analytical Chemistry in Purdue’s School of Science. “Left-handed serine was able to form clusters with strong bonds, and left-handed serine clusters are able to link to other left-handed amino acids. So once serine took the left fork in the road, only the lefties in the primordial soup got to partner up for the dance of life.”

Proteins – larger biomolecules – followed the lead taken by serine, Cooks said. The study also suggests that the chirality of other biomolecules, such as sugars, was determined by serine as well.

Cooks’ research, co-authored with Sergio Nanita and Zoltan Takats, doctoral students who are members of Cooks’ research group, appears as the cover article in the current issue of the German journal Angewandte Chemie, considered a leading chemistry publication.

Just as books with thousands of words can be written using only 26 letters, the thousands of proteins that form all living things are built out of different combinations of 20 amino acids, which are among the simplest of biological molecules. All molecules exhibit various chemical properties – reactivity, solubility in water and so forth – but one property that is not as familiar outside chemistry departments is the notion of chirality. Hold a molecule with left-handed chirality up to a mirror, and you see its right-handed sibling, a molecule that generally possesses the same other properties as its lefty variant. But serine, one of the 20 letters in the amino acid “alphabet,” is a stickler for chirality in the other molecules with which it associates.

“Most amino acids can form weak bonds with one another regardless of chirality,” Cooks said. “Serine is more particular: it forms tightly bound clusters of eight molecules. The clusters, called octamers, are formed of either all right-handed or all left-handed molecules – no mixing allowed.”

Though it may seem choosy, serine also is tenacious and loyal in its own way. Once formed, the octamers can form strong bonds with other amino acids of the same chirality. They also can form bonds with sugars that have the opposite chirality: a left-handed serine octamer might bond with several other lefty amino acids and some right-handed sugars as well. This bonding might well have occurred early in a sequence of chemical steps that ultimately led to protein in its many forms.

“We believe that in the primordial soup, left-handed serine was sort of the bouncer at life’s dance club,” Cooks said. “If you weren’t a left-handed amino acid, you couldn’t get in to partner up and dance. Because of serine’s ability to form these strong bonds, it essentially forced all other amino acids to twist its way.”

The discovery potentially clears up one mystery – where in life’s development the choice between left-handed and right-handed chirality was made. But another mystery still remains: If molecules possess virtually the same properties regardless of chirality, why did left-handed serine become the kingpin molecule? Why didn’t right-handed serine win out?

“We are not sure whether left-handed serine’s dominance in the earliest period of life’s prehistory was arbitrary,” Cooks said. “But serine can switch its chirality under mild conditions. If somehow polarized light, for example, or a swirling motion in water were present at a critical moment, some of the right-handed clusters could have become left-handed. This could have cascaded into other prebiotic reactions and set the pace for a billion years of evolution.”

Cooks admits that these theories cannot be proven completely, and will concentrate his next efforts on determining whether such conditions could have caused left-handed serine to become dominant. For the moment, he said, he is attracted by the simplicity of the concept.

“There has been a great deal of speculation on how left-handed chirality developed in living organisms, but no agreement about how it happened or how the initial choices were passed on,” he said. “The serine theory gives us a simple, coherent picture of one key process – chiral transmission – involved in the origin of life.”

This research was funded in part by the National Science Foundation and the U.S. Department of Energy.

Cooks is associated with several research centers located at or affiliated with Purdue, including the Bindley Biosciences Center, the Indiana Instrumentation Institute, Inproteo (formerly the Indiana Proteomics Consortium) and the Center for Sensing Science and Technology.