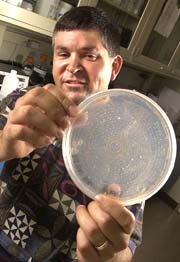 A pickle-shaped root is revealing how plants develop from embryos to adults and also may hold answers about cancer cell growth.

Purdue University researchers have uncovered nine specific genes that are shut off before plants make the developmental transition from the embryonic stage to adulthood. Results of the latest study are published in the July issue of The Plant Journal.

“We now have data supporting the hypothesis that the gene PKL is a master regulator of genes that promote embryonic identity,” said Joe Ogas, an associate professor of biochemistry. “Some of the genes we identified are known to control plant embryo development. They tell the plant, ’be a seed.’ Then PKL says, ’You’re done being a seed,’ and turns them off.”

The genes the scientists identified are part of a class called LEAFY COTYLEDON (LEC). The researchers call them the “master regulators” of embryogenesis, the formation and growth of the embryo. This new study suggests that PKL is the master switch that turns LEC genes off so that the plant can develop the root and leaf systems of adult plants.

“We hope to identify new factors common to both plants and animals that researchers looking at human development haven’t yet found,” Ogas said. “These new factors might then provide insight into regulation of gene expression in humans during normal developmental processes and during abnormal events such as cancer.”

It has been shown that a protein from a specific family plays an analogous role in controlling development in both the laboratory plant Arabidopsis and the laboratory animal C. elegans, a tiny transparent worm.

“This is our first attempt to understand how PKL works as a regulator of gene expression,” Ogas said. “The neat thing about this work is that it’s also shown that in animal systems, a protein homologous, or corresponding, to PKL is also involved in turning off developmentally regulated genes. So, we’re finding similar regulatory roles for both human and plant proteins.”

Ogas and his team found the embryo-promoting genes by studying a strain of Arabidopsis in which PKL is abnormal, or mutated. The mutated gene, designated as lowercase pkl, was unable to repress the embryogenesis genes. The result is a plant that is dwarfed compared to a normal plant, has a pickle-shaped root, and characteristics of both an embryo and an adult plant.

Ogas said they found that embryo-promoting genes are expressed at inappropriately high levels when PKL has not turned them off. This results in seedlings that still have embryonic traits.

The researchers believe they now can turn PKL on and off and that they know the chronology of steps needed to regulate genes that foster embryonic behavior.

The researchers studied 8,000 Arabidopsis genes to determine the specific ones that would only turn off if PKL is fully functional. Once PKL switches those embryonic genes off, the plants can proceed into normal adult development.

Ogas and his team used microarray analysis, in which bits of DNA are placed on a microchip, to identify nine genes involved in the development pathway. They also found that a number of genes that may be important to plants in the embryonic stage apparently are not affected by PKL.

“It is likely that some other proteins that act in this PKL-development pathway are used in animal systems,” Ogas said. “Thus, some of the lessons that we learn by working in Arabidopsis also might be applicable to regulation of human gene expression.”

The other researchers involved in this study were: postdoctoral student Stanley Dean Rider Jr. and graduate student James Henderson, both of the Purdue Department of Biochemistry; assistant professor Jeanne Romero-Severson of the Purdue Department of Forestry and Natural Resources and the Computational Genomics Center; and research scientist Ronald Jerome and professor Howard Edenberg, both of the Indiana University Department of Biochemistry and Molecular Biology.