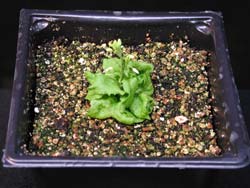 This mutant plant is stouter and bushier than a normal plant because of an alteration in two genes related to human multidrug resistance genes. A Purdue University research team led by Angus Murphy is uncovering functions of these genes and the related proteins that could result in heartier plants and improved treatment for human cancers. (Purdue Agricultural Communication photo/Tom Campbell) <br>

In a paper published in Thursday’s (6/26) issue of Nature, the scientists report that these abnormal, or mutant plants are able to reorient themselves in response to light and gravity more rapidly than normal, or “wild type,” plants. Apparently plants behave differently in accordance with how a growth hormone moves through them. Because the two genes affecting transport of the hormone are related to human genes that impact the effectiveness of chemotherapy drugs, controlling these genes may allow physicians to better determine the dosage of cancer drugs.

“We now know that if we can modify these genes, we can control the growth of the plant in very specific regions,” said Angus Murphy, assistant professor of horticulture and senior author of the paper. “This means we might be able to change the shape of upper portions of a plant or develop a more robust root system.”

These genes are related to multidrug resistance (MDR) genes in humans. MDR genes transport anticancer drugs out of cells, rendering the treatment less effective. The genes are designated with capital letters, while the mutated, or altered, genes are designated with small letters (in this case, mdr). Murphy’s research group found and studied the altered genes in the commonly used experimental plant, Arabidopsis(pronounced: Ah-rob-ah-dop-sis).

The Arabidopsis mdr mutations disrupt the accumulation of a protein, PIN1, at the base of cells in the stems of plant embryos, Murphy said. Because PIN1 is an essential part of the system that transports the growth hormone auxin, dislocation of the protein impairs flow of the hormone through the plant. This alters how the plants develop and respond to factors such as light and gravity.

Relocation of PIN1 and selective disruption of auxin transport makes plants bushier and affects fruit production. Transport of auxin to roots is actually enhanced in some mdr mutants, so the same gene modifications may alter root structures to make plants more adaptable to different soil types.

In addition, discovery that MDR-like genes play an integral role in transport of auxin could impact human cancer chemotherapy treatments, Murphy said. Researchers already know that MDRs move the drugs out of cancer cells, but they don’t know what other transport functions they perform or exactly how they work.

“We’re assuming that they work together with other transport proteins to move toxic compounds out of cells, but we don’t really know,” Murphy said. “The idea that they could be affecting where those transport proteins go in human cells has tremendous implication for studies in humans as well as plants.”

One way to find out more about transport proteins is to find out how a gene affects a plant’s development.

“We learned how these genes function by knocking out the gene,” Murphy said. “This is the genetic equivalent of taking a car from the assembly line and just pulling out a particular part. When the car is finished without the part, you see what works and what doesn’t.

“In this case, we have removed two parts with similar functions to find out more about what they do.”

Murphy said the research team would like to alter plant growth by changing the gene slightly rather than turning it off altogether. They know that one MDR mutation in another plant species results in plants that are shorter and stockier with a bigger root system than in the wild type. These mutants are more resistant to wind and may be more robust in difficult environments where the soil is poor and the climate is arid.

“Timing is also important,” he said “If we can turn these genes on and off at the right times, we may be able to enhance a valuable trait.

“For instance, right now you have to mechanically pinch off chrysanthemums so they will spread, or apply a growth regulator to produce useful ornamental plants from cuttings. If, instead, we could insert a program into the plant to activate or inactivate auxin transport at a particular time and in a particular part of the plant then the plant would automatically become bushier or produce more flowers.”

Further research on auxin transport will investigate whether other MDR family members influence PIN1 distribution and also what specific relationships exist between members of the MDR and PIN families of transport proteins.

The National Science Foundation provided funding for this research.