Home / Life Sciences / Cellular cleansing: ARF6, a protein indispensable for the elimination of waste and pathogens
25.06.2003

Cellular cleansing: ARF6, a protein indispensable for the elimination of waste and pathogens 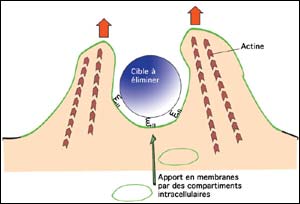 Target enveloping :Once cellular waste are recognized and anchored on membrane;; the assembly of actin filaments starts. The membrane progressively engulfs the waste; what needs a supply of membranes from various internal cellular compartments.When the membrane folds fuse;; the waste is completely ingested by the cell and rendered harmless

Like all living organisms, cells ingest foreign bodies, but not always as nutrients. Ingestion is also used to eliminate pathogens such as bacteria or harmful cellular waste. This cell function, known as phagocytosis, is vital, notably to the immune and inflammatory response.

CNRS research scientists at the Institut Curie have recently clarified the function of the protein ARF6 in phagocytosis, a mechanism which is still poorly understood. When ARF6 is lacking, the cells can eliminate neither waste nor pathogenic microorganisms. This breakdown in the “cell cleaning” system may then result in major dysfunction (infection, inflammation) or even compromise the organism’’s integrity (risk of tumor).

These results are presented in the 23 June 2003 issue of Journal of Cell Biology.

Cells sometimes employ surprising means to eliminate particulates that threaten the body’’s equilibrium: they ingest and then digest them. This is achieved by phagocytosis when the particles exceed 250 nm in size. These may be cell debris, aging or damaged cells, or bacteria. In mammals, this “cellular cleansing” is done by certain categories of immune cells: macrophages, neutrophils and dendritic cells. Macrophages, for example, ingest more than 100 billion senescent red blood cells every day.

Phagocytosis is a cell function essential to the immune and inflammatory response:

In the case of chronic infection or inflammation, the body’s equilibrium is compromised and there is even the risk of the development of tumors. In particular, a link has been established between Helicobacter pylori infection and the development of gastric cancer, but the mechanisms brought into play in this model of oncogenesis remain poorly understood.

A very recent American publication has provided a clue to the putative link between chronic inflammation and the appearance of cancer: in mice whose phagocytic and immune functions are deficient, chronic infections lead to the growth of spontaneous tumors when the animals are not treated with antibiotics. This is new proof of the importance of phagocytosis, for good functioning of the body.

When “cleaning cells” recognize a target to be eliminated, using their membrane receptors, they anchor it to the membrane. Phagocytosis then starts with the formation of membrane folds, a sort of envelope which progressively engulfs the target until it is internalized within the cell.

To enlarge the surface area of the membrane so as to allow enfolding of cellular waste, a supply of membranes from various internal cellular compartments is indispensable. When the waste is fully enveloped, the membrane folds fuse thereby completely ingesting the waste and rendering it harmless. The waste is then conveyed to vesicles where it is degraded. At this stage antigens are processed and once transported to the surface of cells, will trigger the immune response (acquired immunity).

At the Institut Curie, Philippe Chavrier’’s “Membrane and cytoskeleton dynamics” team is studying the reorganization of the membrane and of the cytoskeleton during phagocytosis. It is focusing in particular on the protein ARF6, which is thought to play a part in phagocytosis and in cell motility, and whose precise function remains to be elucidated.

Like many proteins, ARF6 works as a “biological switch” flicking successively between the inactive and active states, during which it fulfils its functions. In this new work, Florence Niedergang of Philippe Chavrier’’s team has demonstrated for the first time that ARF6 is activated during phagocytosis, at the start of the process, suggesting that it plays a part in the early stages of the engulfing of waste.

To study this hypothesis further, researchers at the Institut Curie studied phagocytosis by scanning electron microscopy in cells where ARF6 is blocked in the inactive position. They found that the extension of the membrane around the waste is soon stopped. Furthermore, they noted that the interruption was not due to blockade of actin polymerization but to defective delivery of membranes from the intracellular compartments.
ARF6 therefore plays a crucial role in the delivery of membranes during phagocytosis.

As phagocytosis and cell motility share several features (see below), ARF6 could also be indispensable to cell motility and may be involved in the formation of metastases. The presence of metastases renders cancer treatment more problematical, and so it is important to identify the proteins that participate in this process and which could in time serve as targets for new therapies.

The work of Philippe Chavrier and his team at the Institut Curie therefore provides fundamental information on the mechanisms of phagocytosis, while providing a glimpse of new leads in the understanding of cancerous processes.