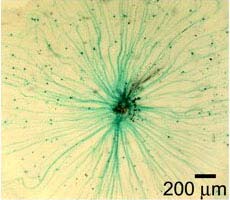 Easy-to-detect tau-lacZ protein turns melanopsin-expressing cells in the retina of a mouse into blue beacons. The long blue strands are the cells’ axons, which head into the optic nerve and eventually end in parts of the brain that control the internal clock and the opening and closing of the pupil. <br>

Putting to rest years of controversy, an international research team led by Johns Hopkins scientists has discovered that the eye’s job of detecting light is most likely carried out by just three cell types.

Writing in the June 15 advance online section of Nature, the team reports that rods, cones and special retinal cells that make a protein called melanopsin together account for the entirety of a mouse’s reaction to light levels. Others have proposed a role for cells that make proteins called cryptochromes, but that doesn’t seem to be the case for mice — and probably not for man — say the researchers.

“We’re fairly confident the rod/cone system and the melanopsin system are the mammalian eye’s only two systems for detecting light levels,” says King-Wai Yau, Ph.D., professor of neuroscience in the Johns Hopkins School of Medicine’s Institute for Basic Biomedical Science and a Howard Hughes Medical Institute investigator. “Never say never, but there’s no evidence for a third system right now.”

Producing visual images is the eye’s most well-recognized job, but detecting and reacting to light levels is critical to well-being. With this accessory ability, the eye maintains the body’s internal clock, the pupil’s ability to react to light, and the motivation to be active during the appropriate part of the day. Without signals from the three cell types, mice lost these normal abilities, the scientists report.

For their experiments, Yau and postdoctoral fellow Samer Hattar, Ph.D., removed the genes for three key proteins, each of which helps pass along light information from rods, cones or melanopsin-producing cells. Previously, the traditional way to prevent information from rods and cones — also the eye’s vision-producing cells — was by using a mouse model in which rods and cones degenerate.

“We wanted to avoid the uncertainty of the traditional ’rod-less, cone-less’ mouse,” says Hattar. “With that model, you can’t be sure what percentage of the rods and cones are gone, and you can’t be sure that the degenerated retina itself isn’t affecting your observations.”

Cross-breeding these single knockout mice eventually produced offspring missing all three proteins (triple knockouts), those who had a “half-dose” of each of the three proteins, and those with various combinations of protein levels.

Experiments at Johns Hopkins with Robert Lucas from Imperial College London showed that the triple knockouts couldn’t adjust their pupils at all in response to light. In experiments at the University of Toronto, co-author Nicholas Mrosovsky discovered that the triple knockouts also didn’t appropriately adjust their activity levels when exposed to light. Mice with a half-dose of each of the three proteins reacted normally in both experiments.

“Even if its internal clock says it’s night, a normal mouse exposed to bright light will become less active, hide or even go to sleep,” says Yau. “It’s thought of as a change in motivation, perhaps the mouse’s recognition that in light — even if it’s supposed to be nighttime — a predator has a better chance. However, triple knockout mice were as likely to be active in bright light as in darkness.”

The researchers designed additional experiments to rule out any contribution from cryptochrome proteins, which are involved in light detection in fruit flies. Because each light-sensitive protein is most sensitive to a characteristic wavelength, or color, of light, exposing mice to light of a single wavelength can reveal the protein most important for the eye’s non-visual functions.

In these experiments, conducted at the Imperial College London, colleagues discovered that traditional rod-less/cone-less mice were best able to “reset” their internal clocks when exposed to the same color of light that is favored by melanopsin-producing cells, not cryptochromes.

“In fruit flies, there are several systems that contribute to light detection, and in some animals, such as zebrafish and birds, light detection isn’t even limited to the eye,” says Hattar, who is now separating the light detecting roles of rods and cones, something not possible with traditional rod-less/cone-less mice. “But in mammals, all these functions — vision, circadian rhythm, light-induced activity — exist in a single place, the retina, and in just two systems.”

Among blind people — whose rods and cones don’t work — melanopsin-producing cells remaining in the eye seem to provide enough information to keep the body and mind on schedule. However, people can develop circadian rhythm, or internal clock, disturbances after loss of the eyes, such as in an accident.