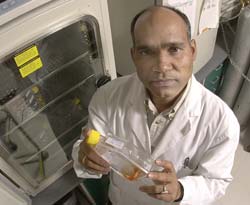 Whether food-borne bacteria make people sick depends on a variety of factors, and better understanding of the infection process could lead to ways to stop such illnesses from occurring, according to Purdue University scientists.

In the first comprehensive study of the virulence of Listeria monocytogenes, researchers report that how well the bacteria attach to cells does not alone determine the degree of illness. The factors that determine if a person becomes ill and the degree of illness include the levels at which the pathogen attaches to intestinal cells, penetrates cell walls and then moves into other organs, said authors Arun Bhunia and Ziad Jaradat, both of the Department of Food Science. The paper is published in the June issue of Applied and Environmental Microbiology.

Listeria is one of the deadliest food-borne bacteria, with a fatality rate of 20 percent, according to the Centers for Disease Control and Prevention (CDC). It sickens about 2,500 people annually in the United States.

“I’m interested in understanding how the bacteria interacts with the intestinal cells,” said Bhunia, who is part of the department’s Molecular Food Microbiology Laboratory. “If you eat food that contains these bacteria, the first place they react with cells is in the intestinal track. If we understand the initial interaction of Listeria in the gut, we might be able to prevent the binding and, therefore, the infection.”

Listeria enters the body when a person eats contaminated food. Listeria then binds, or adheres, to intestinal cells. If it is a viable, disease-causing strain, it will penetrate the cell wall, causing infection. Once the bacteria have done this, the infected cells will move, or translocate, to another organ, usually the spleen or liver. Very potent Listeria strains also can cause encephalitis, or brain inflammation.

Bhunia and his co-author studied 25 strains of Listeria, including some that specifically have caused outbreaks of human illness. In the past two decades, four types of Listeria monocytogenes have been responsible for 90 percent of the outbreaks of the illness they cause, listeriosis, according to the CDC.

The researchers introduced Listeria to human intestinal cells in laboratory dishes and to mice to determine how tightly the bacteria bound to cells, how quickly they invade cells and to what organ they spread.

“This is the first comprehensive study in which this many strains of Listeria were tested for all three infection aspects – adhesion, invasion and translocation,” Bhunia said. “We didn’t find any direct relationship between adhesion and invasion; adhesion is needed but is not an indicator of infection.”

The lack of direct relationship between the binding of the bacteria to the cell, like a key in a lock, and how highly invasive it is, means that both factors much be evaluated for each type of Listeria, he said. Though one type may bind tightly to the cells, it may not be able to enter the cell in a way to cause illness. Conversely some strains may not adhere to the cell as well but may be highly invasive and extremely harmful.

“We also found that the strains that had caused previous outbreaks in humans were highly invasive of cells and then translocated rapidly to the brain,” Bhunia said.

Only extremely infective bacteria can invade the brain because most pathogens cannot get through the brain’s protective layer, called the “blood brain barrier.” Bhunia said these Listeria strains can enter the brain within 72 hours of when tainted food is eaten.

“This study gave us a good idea of how different Listeria strains bind to intestinal cells and how that relates to infection,” he said. “If we understand enough of the mechanism of bacterial adhesion to cells before it actually causes damage or becomes systemic, then maybe we could come up with a strategy to prevent the illness.”

The researchers are now studying individual proteins that may play a role in Listeria binding to cells, Bhunia said. If they can identify those proteins, they may be able to use genetically modified versions to prevent the infection process.

The U.S. Department of Agriculture Agricultural Research Service and the Purdue Center for Food Safety and Engineering provided funding for this study.